I get this question a lot. Why are you getting a hysterectomy? First, it’s important to understand what fibroid tumors and cysts are.

Fibroids are benign tumors that can grow rapidly throughout the uterus. Inside, in the lining, and even through the outside of the uterus itself. Many woman will have a fibroid in their lifetime but not everyone will have them get out of control to the point where medical intervention is necessary. Fibroids can cause a host of problems and can grow to be several pounds in size. Women commonly have more than one.

Ovarian Cysts are different from fibroids in that they can rupture, bleed and also twist and cut off bloodflow to a woman’s ovaries, requiring surgery. They too can be small and non-bothersome, but others can cause health complications and dangers. Cysts can also turn cancerous unlike fibroids which almost never do. 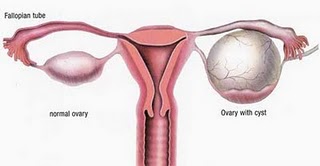 I have multiple fibroid tumors. Several were found to be the size of a softball each, while several more were found to be the size of a baseball each. I also have at least one massive cyst on my right ovary. In ultrasounds it completely blocks the view of ovary and the right ovary may need to be removed during surgery depending on the location of the cyst. They won’t be able to fully see where it is and what threat it poses until they are in there laparoscopically.

Well, there are two real options for my condition. One is a surgery called “Myomectomy” and the other, of course, is Hysterectomy.

A Myomectomy is a surgical procedure, where you are put under general anesthesia and the surgeon cuts out the fibroids as well as parts of the uterus where the fibroids have been attached. It tale 4-6 weeks of recovery and can leave you scared and unable to carry a pregnancy to term. Even if you can, you will require a C-section for delivery. Oh and the fibroids WILL grow back. In 3-5 years, I’d be doing it all over again.

A Hysterectomy is also a surgical procedure, also under general anesthesia but this time the surgeon takes the whole uterus out. Mine will be the uterus, the cervix and possibly the right ovary depending on what they find with the cyst situation. It’s also 4-6 weeks of recovery. But you’ll never have a fibroid again. It is the ONLY way to permanently cure fibroid tumors. It has the added bonus too that I’ll never have to have a period again. And because I’ll keep at least one ovary (both if possible) I will NOT go through menopause because the ovaries are where the hormones are regulated from. I will never need another PAP and I will never get cervical cancer.

Surgically, a myomectomy is more dangerous because the doctor is trying to leave parts of the uterus intact. Both come with the same range of heal time and both are major surgeries. But only a hysterectomy can solve the problem forever.

For me, it just makes more sense. I also struggled with out of control menstrual cycles my entire life. Without being on the Pill, I couldn’t function. This will solve my fibroids and my extreme periods all at the same time. And I’ll only have to do it once.

I hope that helps clear up the questions of why I’ve chosen this treatment option and why I feel it’s the best course for me. It solves not only the fibroid problem, but also eliminates my extremely irregular periods and gets me off hormones and medication for good. It’s a win-win process. Don’t get me wrong, the thought of major surgery terrifies me but it’s major surgery either way and this way, it’s also the first and last time I’ll have to do it.