Ok, I’m probably the only one excited about this, but today, three weeks post hysterectomy, all of my incisions are now scab-free and looking awesome!! I just got out of the shower were the belly button incision (by far the ugliest and largest of the cuts) shed it’s scab! I have a {quasi-normal} belly button again!

Yes, I know…this is a strange topic of discussion to be sure. But, this is my first surgery and this is all new to me and I’m excited by the positive signs of healing. (At least externally anyway. Hopefully the innards are doing good too!)

Here’s my tummy from about 15 minutes ago:

It looks almost normal! I really think it’s going to be tiny, minimal scars. That’s awesome. I mean, look!! I have a belly button again!!

Anyway, the other incisions have slowly been shedding their scabs over the past few days as well and now they’re ALL gone. Since the photos aren’t really terribly graphic anymore (they’re just healing skin now) I’m not going to bother cutting them. Sorry if this icks anyone but really, they’re not even wounds any longer.) 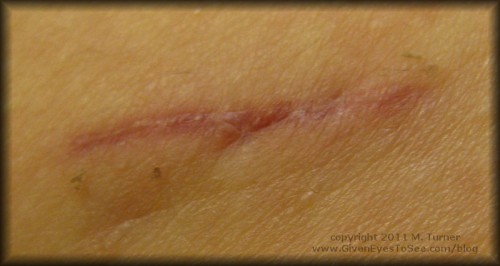 This is the left-side one. It’s the big one and where the worst of the pain has been. (And still is somewhat, but getting better.) This is the side that my doctor used as his working port, so it was larger than the other side and more roughly handled on that side. But, there’s nice, new, pink skin there now! 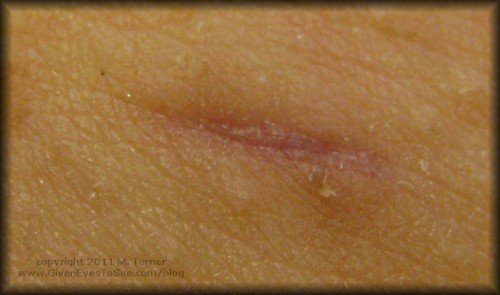 This is the right side incision. This is much smaller as this is the assistant port. It’s already looking tiny and awesome.

And this is my belly button. (Which apparently has a lot of glue residue still on it. Things you don’t really see in person that show up on a macro photo!! LOL)

Anyway, I’m thrilled. If the swelling gets under control, maybe now that it’s not scabbed over, I can possibly wear real pants again. Wouldn’t that be nice? (Let’s not get too excited or ahead of ourselves now! LOL)

Pain has been annoying but not unbearable by any stretch of the imagination. I’m just uncomfortable. My back hurts around my waist area on the left side. Like, if you took your hand and put it on your waist the areas around there, front and back, are where it hurts. But I haven’t taken anything more than my ibuprofen since Saturday. (And Saturday was only 1 and only because of the flat tire fiasco.) Today, actually, I am going to try to drive myself to the post office for the first time since before surgery.

I’ll let you know how that goes.