Just got home from my day of pre-op appointments. Had my final ultrasound and met with the doctor and then went to the hospital where I met with registration, a surgical nurse and then anesthesia nurse. After that, I ran to a nearby AAA location to get my will and health care directive paper notarized. I just got home now. I’m super beat. It was a LONG day. (This will probably ramble all over the place so I apologize. I have a lot to go over too!)

First off, everything went well. I am all set and ready for Wednesday’s surgery. The hospital did not ask for money and I did not mention it so that’s a huge relief.

Ultrasound/Gyno
Secondly, as I mentioned in my last post from my cell, the ultrasound showed about 300 grams of tumors. The doc thinks there is more in there then what can be seen and measured so even if there’s 400 grams he’s still very pleased with that. We started this at about 1,200 grams that could be seen and measured. He has no problems with surgery, thinks we’re in an absolute “perfect” situation for it and thinks we did everything right and that it was really smart to wait, do the Lupron, get them smaller, get me more stable, etc.

I asked him if he had ANY hesitation or concern or qualms about surgery and he said his only hesitation is that I haven’t had kids. I said that’s not a hesitation for me, so we’re all good.

Hospital Registration Process
The hospital processed me into the admitting and like I said, didn’t ask for money. I didn’t mention it either but I saw three people today so it’s not like they didn’t have ample time to ask if they had required an upfront payment.

The surgical nurse was very nice and she helped me calmed down a lot. When I was at the gyno, my bp was 128/74 and by the time I had calmed down and talked to the nurse a bit and went over things and such, it was down to 108/68 or something similar. Plus my pulse went down from 129 to 84 so that’s good too. (I was VERY shaky and nervous this morning!)

After that, we had to wait for about a half an hour then I met with the anesthesia nurse who asked me about motion sickness and such and said they’re going to do a preventative amount of meds since I don’t really have any idea how I’m going to react. She said they’ll give me something before they put me under and then another dose right before they wake me up. I told her I really did not want to experience throwing up with abdominal surgery and that I do tend to have a touchy stomach in general. She didn’t feel there was any cause for concern or any red flags either. She also said they would talk to me again before surgery as well and that the nurse would stay at my side the entire time. So that was comforting.

Surgery time, check-in, restrictions, etc.
My surgery is currently set for 12:30pm with a check-in at 10:30am Wednesday. 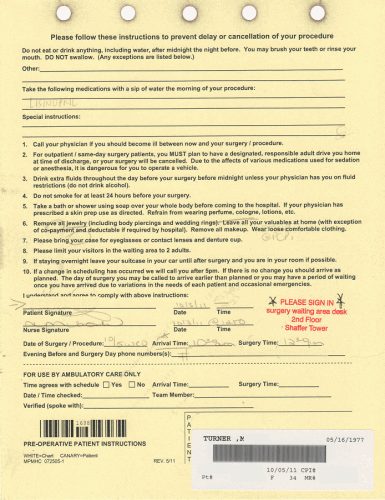 I can eat and drink with no restriction until midnight Tuesday-into-Wednesday. Tomorrow, I need to push fluids until midnight. Wednesday morning, I should take a shower and get nice and clean. I don’t have any specific cleanser I need to use and no bowel prep or any weird dietary restrictions.

Surgery should be about 2 hours approximately. I may be under a little longer before and after but that’s a good estimate based on the size of my tumors at this point.

23 hour status
I also asked about the fact my insurance has me coming in as a “23 hour observation” instead of an inpatient. Turns out the clock starts on the 23 hours when you are in your bed in your room. So no worries there. The logic behind that is it’s not until you’re in your bed in your room that you’re under “observation.” Before that you’re in surgery and post-op. This means I’ll have until probably Thursday evening before I need to check out under the 23 hour timeline but that should be WAY more than enough.

Finances
Paid the gyno $300 and have $211 to pay on Friday for other half of surgery fees. I then have a $600 balance to finish paying off. After that, 90 days following surgery, all surgery-related visits are no charge. (I get a 90 days surgical warranty. LOL)

I didn’t have to make a payment today to the hospital but I’m sure that bill will come in afterward – especially since I have about $700 or so still in deductible I think.

I also still have over $10,000 in bills from the ER trip to the hospital, the ER docs, the radiologists and the labs. All of it is billed separately so it’s hard to pay it all, even a little at a time since it’s so many different groups. I’m trying to send like $10 to each of them each month but there’s so many bills! Hopefully, I can just keep plugging away at all of them. I wish I could knock out a few of the lower ones – like the labs and such – but even the cheapest ones are like $300.

Thank you
I had a lovely surprise in my post office box today. A little care package and a donation. Thank you, Tracey, you really cheered me with the book. I showed it to my Mom today and she was really impressed too. It’s full of positive quotes and stickers on the pages. You can tell a lot of care went into it. 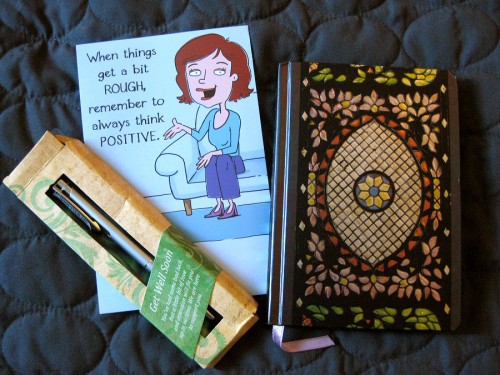 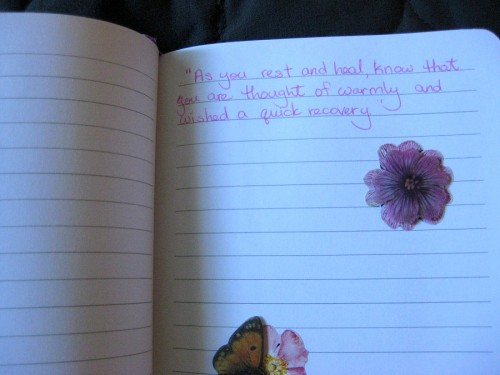 That was just so thoughtful of you. Thank you, truly.

Me
I woke up a wreck today. Right now I’m ok but I think it’s because I’m just exhausted and a little numb from the stress and such. You can only stay that tense for so long. Right now I just want to relax, have some dinner, watching some tv and go to bed early. I’m tired and ready to just veg a bit. Tomorrow I plan to take it easy. Wednesday, surgery isn’t super early so I can try to sleep in a little, take a shower and get to the hospital. I’m trying to breathe and be calm but in general it’s hard because I’m scared. I know it’s the right thing but logic doesn’t come into play for fear.

Surgery Details
This part may be gross or TMI so I’m putting it behind a cut. Everything behind the cut is related to that so if you don’t want to read it, you’re not missing anything. Everything else I’ve summed up already above.

Ok so for those really curious, here’s the specifics about the surgery itself.

We’re doing a TLH or Total Laparoscopic Hysterectomy. There will be four incisions plus one in my belly button for the camera. Two on the left and two on the right. It’s my doctor and another doctor assisting and so it’s two holes for each of their two hands.

I asked if he takes it out whole or in pieces. The answer is pieces. And instead of taking it out in 30 or 40 dime-sized pieces through the tiny incisions, since I’m losing my cervix as well, he’ll take it out in half a dozen long, narrow strips through the vaginal opening. It’s not a vaginal hysterectomy, but that’s the largest “hole” he’ll have so that’s what he uses. Unlike a vaginal hysterectomy though, things don’t come out in huge pieces or uncut pieces and I don’t have to be spread like the Grand Canyon either.

He said my left side and my right shoulder will hurt. They pump you full of gas to expand the surgical area and give more room to work. The gas travels upward and though they do their best to get it out, some will get up into my shoulders and cause pain there. It’s part of why you need to walk and move; it helps get the gas unstuck and out of your system.

Because of my tape allergy, he will use glue for the incisions. He usually doesn’t like glue because it’s messier and puckers a little and you have to work to get the line of glue off later versus just pulling the tape off, but an allergy is an allergy. I asked if it will scar more or anything and he said no.