Still hanging in there. Still swollen and sore. Weak but getting more mobility.

Transitions continue to be easier. (Sitting to standing and standing to sitting.)

Tried to cut back on my pain meds Saturday but it was too soon. That was a bad day pain wise until the percocet finally kicked in. Yesterday, I took my meds about every 6 hours (instead of every 4) and did ok. Today, I took my percocet this morning around 5am when Love got up for work but haven’t since. Did take my ibuprofen though around lunch time.

Slowly getting my appetite back. Trying to remember to eat, even just small snacks.

Walking around the apartment. Don’t feel strong enough to brave the 3 flights of stairs yet, so confining my walking to inside here.

I do tend to notice small improvements each day, though this is definitely still a marathon and not a sprint. It’s going to be awhile. Things are still very difficult and even the littlest task can challenge and exhaust me.

There’s not a huge amount to report really. All the days are sorta blending into each other. Today was the first day Love went back to work. I’ve been ok by myself today. It wasn’t so bad. I really haven’t been online much at all and I haven’t read any blogs or facebook or anything since before surgery so I’m sure I’m really out of the loop on everything. Sorry.

Mainly just sitting around and passing time, trying to heal.

For those curious, I’m going to put a picture behind the cut of what my stomach looks like post surgery as of last night. It’s not terribly graphic but I didn’t want anyone to be bothered by an image they weren’t expecting. Only the image and commentary on the image will be behind the cut, the rest of the entry ends here. Thanks to everyone for your well-wishes. 🙂 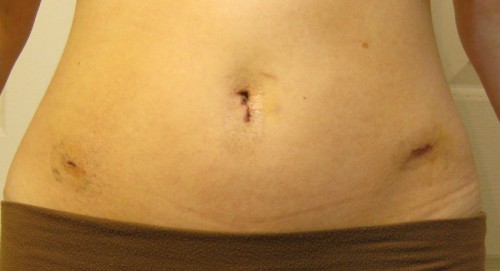 The belly button incision is ugly! It has a big scab. It’s less puffy though then it’s been.

The incision on my left is the one that hurts the most. It’s where he told me to expect the most pain. The one on my right is smaller and less painful. There is one additional one that is very small right on the hair line you can’t see in this shot. The stuff around the cuts is lint. Because I have a tape allergy, he used a glue and there was a tacky area around each incision where lint from my pj pants stuck to the glue. I can’t scrub hard enough to get it off, so it’s just there until the glue comes off completely.

It’s hard to tell in this shot but I’m also swollen though less so from the day of. My right side is more distended down to my pubic bone as well.

It’s crazy that it only takes these four incisions to remove the uterus, cervix and the six fibroid tumors from me though, hu?