Got up this morning, got ready and drove up to my Mom’s house. (About 25 minutes away.) Hopped in Mom’s car then drove up to Inverness, Florida. It’s is where my Nanny lives (my Mom’s Mom or my Grandma though she’s always gone by “Nanny.”) One of my cousins was in from Las Vegas and he came over too plus one of my Mom’s sisters who lives in the area.

Inverness is far away. Over 70 miles far and quite a ways, in the middle of nowhere out into the boonies. To give you an idea, the circle on the map is the Tampa Bay Area. The red arrow is Inverness. For reference, the yellow star is Disney. It actually takes less time to drive to Disney than Inverness! 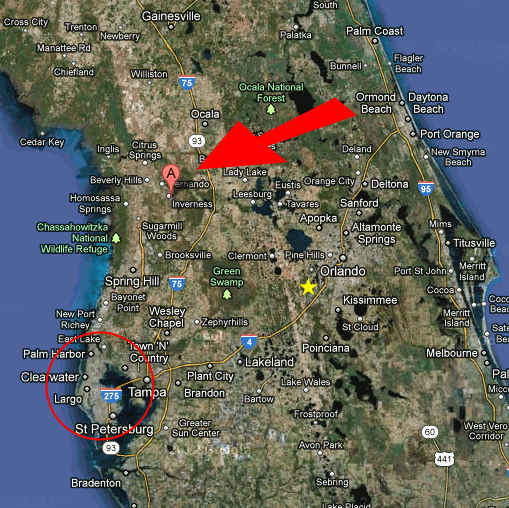 We hung out with Nanny for awhile and then my cousin was hungry so we piled in my aunt’s truck and drove to a little Mom-and-Pop dinner down the road. My cousin joked it was like the “before” on one of those restaurant makeover shows. Which, well, yeah he wasn’t lying.

We both agreed though that maybe it just wasn’t aimed at our demographic. Food was fine and the server was nice it was just…kinda not a youthful vibe.

After, we went back to Nanny’s and looked at some really old photo albums. Then it was time to go. My cousin rode back with us and we detoured to drop him off at his Dad’s house since it’s in Brooksville which is on our way back south. Of course, we couldn’t just drop him off, we went in and said hi and I met his Dad and Stepmom. They’re really nice people. We chatted for a few then headed back out on the road.

It was close to 8:30pm by the time we got back to Mom’s then I picked up my car and headed the rest of the way home. And almost 9pm by the time I got home. Poor Love starts getting ready for bed at 10pm since he gets up at 5am which meant we watched an hour of tv together then he had to head to bed.

A very long day but nice though. I obviously don’t see my cousin often since he’s in Vegas and I also don’t get up to Nanny’s very often since it’s such a long drive up there.

Super tired though so I’m heading to bed.

I’ve been completely MIA from the interwebs today though so I’ll catch up tomorrow.