Dreaming of a New Vacuum

I spent Monday afternoon partially disassembling my vacuum cleaner and trying to unclog the completely stuffed hose. It was messy, disgusting and absurd.

The vacuum cleaner is like 2 years old. And it pretty much rarely, if ever, works anymore. It just gets completely and irrevocably clogged up. I get that we have two cats but come on, isn’t a vacuum cleaner made to suck up dirt and debris? Isn’t that the whole point?

The canister was completely empty. Nothing to empty out. And yet, it wouldn’t suck up anything. It was loud and noisy but useless. We’ve unclogged this stupid S curve in the hose before with a flattened wire coat hanger and got TONS out but I guess we not only didn’t get it all, there was about ten times more than the HUGE amount we got out last time.

I started by unscrewing a mount that holds the S curve of the hose. (The grey bit of hose sticking out from the machine.) Of course, the screw is this weird star bit and took me like 5 tries to find the right fit but thankfully, we bought a big bit kit at Lowe’s months ago and I was able to find one that worked.

By undoing it, I was able to then turn the vacuum cleaner upside down in order to literally shake and pound the clumps out of the hose. When I say the ENTIRE HOSE was full, I’m not kidding. 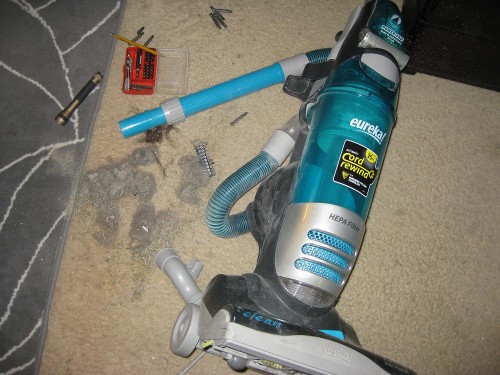 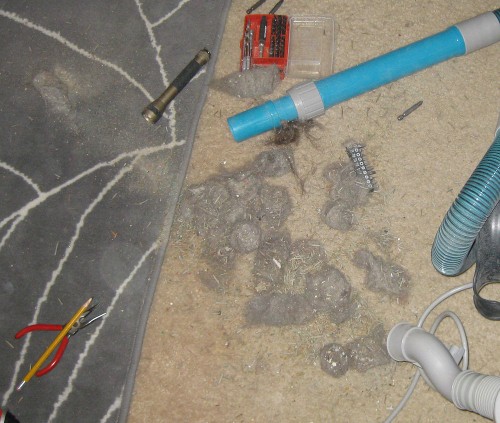 Dirt, cat litter, cat fur, hair, and other shit of course got everywhere and made a massive mess. Remember, we’ve cleaned the hose before – more than once – and still hadn’t managed to clear it all out apparently.

I then worked on the rest of the hose itself, expanding it to stretch and then pounding it against the carpet to move the clumps down the length and out to the carpet. The second picture isn’t even the final amount. I got more out but didn’t take another shot. I ALSO got even MORE out – probably about half again as much from the TOP of the hose in this OTHER “S” curve part where the hose screws at the TOP of the vacuum. WTF??

Shouldn’t a vacuum cleaner be able to, I don’t know, move the debris through the hose into the canister? Isn’t that the whole point of the design? Clearly though, this one is designed to clog and fill up the hose instead and then just stop sucking up new dirt entirely.

I used a small sweep brush and dust pan and gathered as much off the carpet manually as possible and was able to then get enough suction out of it to clean up the remaining fine dust and debris. But how disgusting.

I really want a Dyson. And given the cats, I think a Dyson Animal (which is designed to deal with pet hair) seems best option. They have a factory refurbished one on amazon for like $300. That’s a nice deal. Too bad I don’t have three hundred bucks.

But really, you shouldn’t have to spend an hour taking apart a vacuum, then dealing with all the nasty crap that’s clogged up in it just to try and clean your carpet.