Somewhere Under the Rainbow

That sounds dirty and suggestive. Oh well, WordPress has already named the permalink so I’m sticking with it. (Yes I know there’s an edit button. Don’t bring logic into this.) It’s not meant to be a dirty or suggestive title at all actually. I was just sitting, staring at the empty entry title field and couldn’t think of anything to say and since I have a picture of a rainbow to share, eh, I thought I’d go with a play on a known song.

Mom’s enjoying her vacation. Talked to her the other day and she was excited to report she has now officially been to New England. She and her sister drove up to Massachusetts to visit one of her sister’s kids that lives there. (One of my cousins.) Mom is from New York and, in all her life, she never made it to New England. One of the things she told me she was hoping to maybe do on this trip was make it past New York for once!

And now she has.

Then today, she called because she was in the store in NJ and saw some Baker Pastry Filling and wanted to know which I wanted. See, each year I use it to make my tea biscuit cookies and they don’t sell that brand of filling here in Florida. Or at least not in this part of Florida. So I have to get someone from up north to send some down for me! Mom is bringing back four jars – two pineapple, one apricot and one raspberry.

Oh! So then there’s the weird rainbow reference I alluded to earlier. Today, when Love got home from work, we ran out to the post office to mail out an order (from the shop hint! hint! LOL) and hit the store for dinner items. On the way back home, there was a HUGE rainbow arching across the entire sky. Half the sky was blue with puffy clouds but the other direction, it was all dark and stormy, so there was a perfect positioning of the water and sun to make a massive, sustained rainbow.

I ran upstairs and grabbed my camera when we got home and took a quick shot: 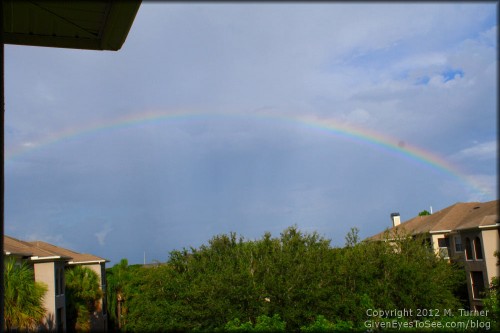 It’s a terrible shot but it was neat since you just don’t see full rainbows here very often. I can’t recall the last time I did in fact see a full arch like that. So I’m sharing it even if it’s not a good photo. It lasted a good 10-15 minutes too which was also impressive.

And that’s where the “under” part came from. Obviously, being in the sky, it’s above me and I don’t live in Oz, so…I’m under it. Though it still sounds dirty.

Anyway, that’s about that for now.