The Tale of the Power Window Regulator Assembly 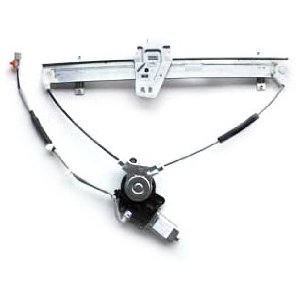 The problem with this part is that there’s a little plastic bit on it that tends to, well, break. And when it does, it loses all tension and the window falls down completely into the door. It takes removing the entire door panel to get access to it not only to fix it, but to even pull the window back up at all. And, when you do take the door apart to get to the window, there’s nothing to hold it up – it just falls right back down into the door.

I know this because about a year ago, it happened to us on the passenger side. Back when it happened, I found a thread about the problem on the element owners club forum. They also said that you can easily replace it yourself if you buy the part. A dealership will charge you about $250+ to do the work but the part is like $50-60. There is even a great step-by-step tutorial on how to do it.

When the passenger side broke, Love popped the door off with help from his brother and used a piece of metal rod to wedge it into place until we could get the part. Finally, like a year later, we bought the replacement part in May. Love got it replaced (with the help of his brother again) and we enjoyed having two functioning windows ever since.

You probably know where this is going.

Friday at work, Love’s driver’s side window makes a noise and….sinks down into the door. Problem is complicated by the fact that Love’s parents were away on vacation and he needs the use of his dad’s tools and the help of another person (such as his brother) since it’s a two-person job to fix. It’s further complicated by the fact that even using my Mom’s Amazon Prime account to get the part shipped to us two-day mail, it won’t be here until Tuesday. 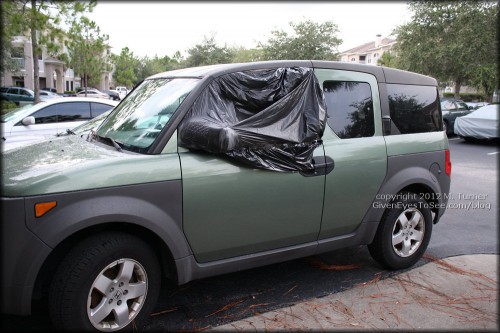 Obviously a completely open driver’s side window with no way of getting the glass pulled up out of the door and no part until Tuesday meant we got creative Friday night with a couple of large, yard trash bags. One slipped over the whole door frame itself and a second wrapped down under it and then thoroughly tapped down along the seams. It poured this weekend and thankfully, our system worked and the car did not get drenched. Not the prettiest look but…it’s dry.

Needless to say we’ve been using my car for errands this weekend.