Barenaked Ladies played the “Bands, Brew and BBQ” event at Busch Gardens Tampa on Sunday, February 17th and I was lucky enough to get to go see them!

I’ve been a fan of Barenaked Ladies (BNL) for years now. I first got to see them open for one of my all-time favorite singers, Sarah McLachlan, when she played in Orlando some 16-odd years ago. They were so much fun and put on such an entertaining show that when I heard they were going to be right here in Tampa, I wanted to go see them.

Bands, Brews and BBQ is an annual event both Busch Gardens Tampa and Sea World Orlando hold. BG has four concerts lined up and I only heard BNL was going to be here about a week ago. The concert is free with your admission to BG so on a nearly last-minute decision, we took advantage of being Florida residents and got $12/month “EZPay” passes to BG and off we went.

The concert is set up in what’s known as the “Gwazi Field” which is a grassy area behind the Gwazi wooden coaster. They have a stage set up as well as some flat bleacher seating. (By “flat” I mean, not stadium, raised style.) They had a VIP reserved area in the front for $35/person which was sold out. Directly behind the VIP area was a grassy, no seat area. It was dead center though and about 10 rows back so we took that portion. We got there about an hour early and had one row of people sitting on blankets in front of us.

By showtime (5pm), the place looked pretty packed. Once the show started, several people pushed forward and I had quite a time trying to dodge and weave and see around people who had usurped by view, but I still managed to get some shots. (Yay for telephoto lens and the quick trigger finger of snapping a shot in the one second the jerks in front of me parted enough so I could see the stage.) Any residual fringe blurriness is from being 5’6″ and getting edges of heads above me. LOL 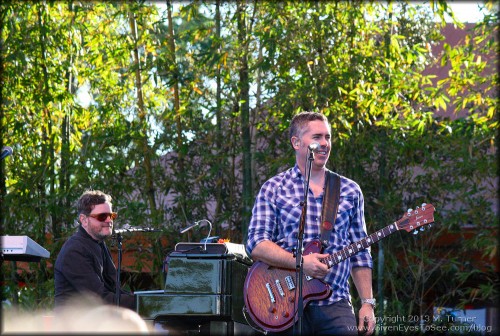 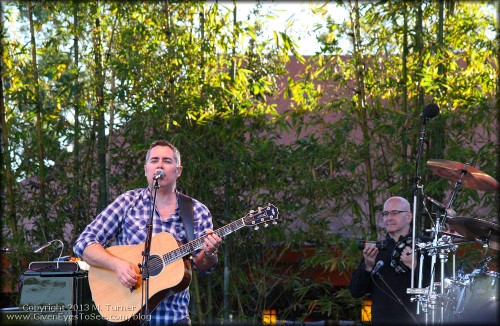 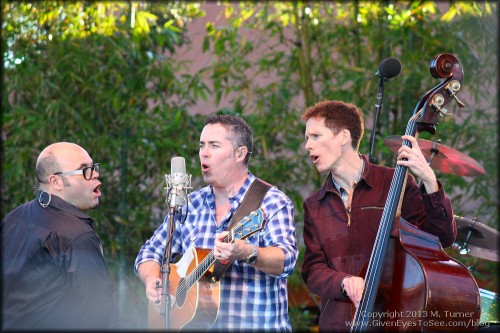 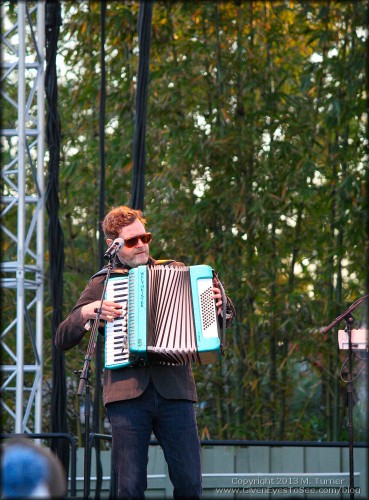 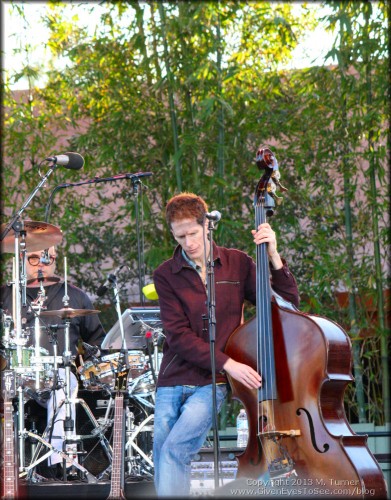 It was another really awesome show. Lots of fun and lots of improve. Ed, the main singer, joked throughout the show about the coasters in the park. There was a coaster nearby called “SheiKra” which he especially enjoyed commenting on. At one point, he joked about holding a new annual event called “StreakRa”:

Here is BNL performing “The Big Bang Theory” which is of course, the theme song to the wildly popular TV show of the same name.

Sorry the videos aren’t great. I took those with my Flip but given how much everyone was moving around and bumping into me, they’re not the best.

It was a VERY good time and I really enjoyed it. If you have a chance to see BNL, I would highly recommend it. They’re excellent musicians, have catchy songs and they’re funny as Hell throughout the entire show.