I’ve long been a fan of the Steampunk aesthetic. Gears, clockwork, copper, leather; that neo-Victorian style combined with some H.G. Wells and a bit of what if? imagination. But it’s not something I’ve ever participated in personally. Until earlier this year I kinda decided to start seeing if I could put together an outfit.

Then Saturday, March 23rd was Steampunk Invasion at the Bay Area Renaissance Festival and I wanted to finally make the outfit a reality. 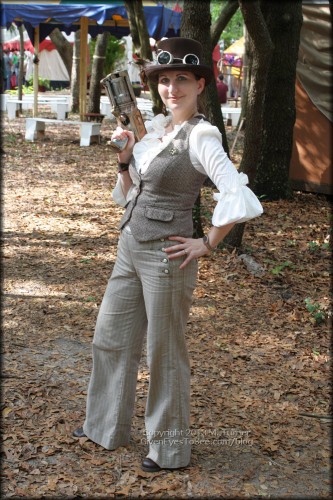 My first ever attempt at putting together a steampunk outfit! (Click for larger)

How’d I do it?
Most women in steampunk wear corsets and skirts/dresses, often with a bustle or pickups. It’s a cool look but man it just looks wildly uncomfortable to me. I know it’s based on a Victorian influence (hence the skirts/dresses) BUT, why limit yourself? I decided to go for a more “liberated” look and opt for pants.

Slowly over a few months, I scrounged GoodWill, ebay and such and pieced together some items that I thought achieved the look I wanted. I found a ruffle blouse, a wool vest and some “sailor” pants with buttons all for super cheap which all worked together. I had a pair of old brown boots that would work and I got some accessories like a top hat, a pair of welding goggles from amazon and a Nerf gun to repurpose and transform. 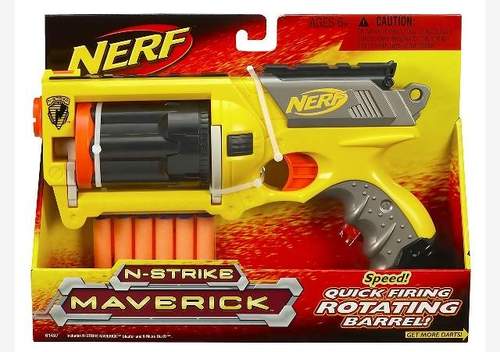 Nerf Maverick gun before modifying it to be a Steampunk ray gun.

I read a lot of info on the net about taking it apart and spray painting it but I got as far as removing two of the microscopically small screws….and couldn’t get the rest. So I just decided to hell with it, I was going to try to paint it without taking it apart. I scuffed the whole thing with sandpaper then sprayed the entire thing with several coats of an “oil rubbed bronze” color spray paint trying to get in as many nooks and crannies as I could. I figured it was only $10 Nerf so I wasn’t too worried about ruining it and wasting money. Surprisingly, the base coat looked and worked great!

I then used Rub ‘n Buff (which I actually found in my local Micheal’s) in “Antique Gold” and “Silver Leaf” with my (gloved) finger and just went to town on it. I did various layers working it until I liked how it looked. I also went back in with some gunmetal acrylic (by Martha Stewart in her “multi surface” paint) and copper which both worked surprisingly well on the plastic. I finished it with some matte Mod Podge (I didn’t have any spray sealer) to help keep it from rubbing off. Few bits of jewelry findings finished the look. 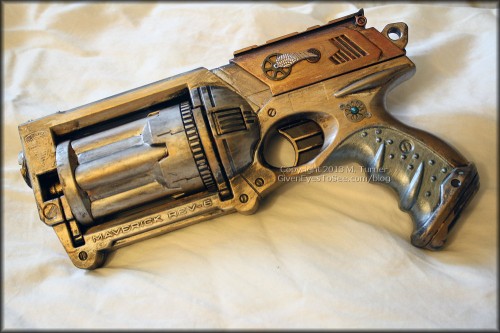 I did the same thing with my welding goggles: a combination of the Antique Gold and the Silver Leaf Rub ‘n Buff took it from this: 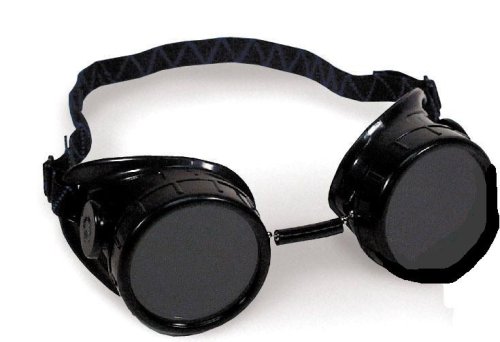 My welding goggles before I modified them 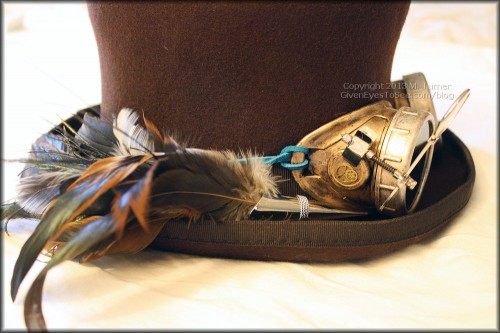 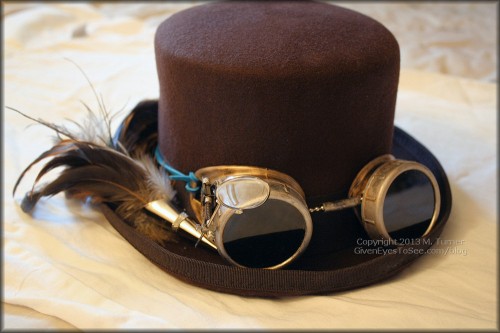 I know I need more accessories – I painted and modified my gun and my goggles on FRIDAY and went to the festival SATURDAY so for putting it together the day before, I was pretty proud – but it’s not hard if you think about modifying things rather than needing to make from scratch. And, like the pants I bought are a real, regular pair of pants (not costume-specific) but when you pair it with an outfit, they suddenly look different. 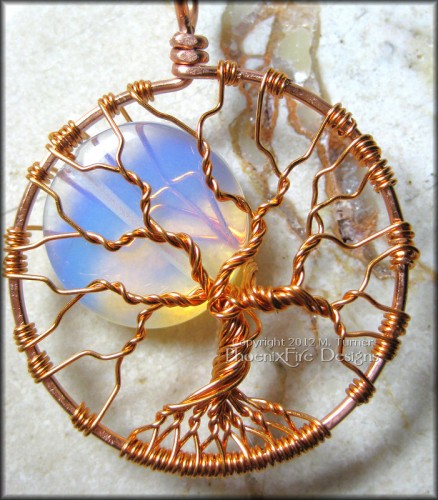 I went to the Steampunk Costume Contest (though I didn’t enter) and talked to a several of the people. They were all really friendly and very encouraging and complimentary on my new costume. So that was really nice. A few people asked to take my picture too which means I must have been doing something right AND I had several people ask me about what the theme was and what “steampunk” was so it was nice to be able to help too. 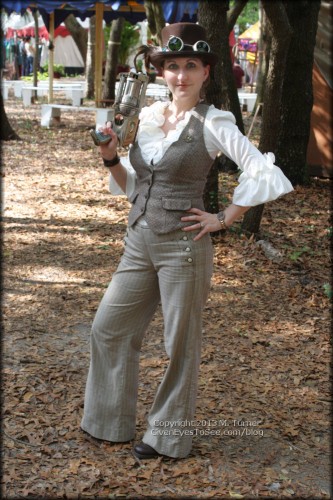 I am really excited about it now and already planning on ways to expand my outfit and improve on it for next time. I was really encouraged and got good feedback and it was a lot of fun to do something different like this! I can’t wait to keep going with it and really make it even better.