Lego With a Side Order of Proselytization

Lego has a program called CUUSOO where fans can create and submit Lego build ideas and through a long and lengthy voting and vetting process, some of those fan-inspired creations can become actual Lego sets. Most recently, on August 1st, Lego released their much anticipated Back to the Future Lego DeLorean Time Machine. 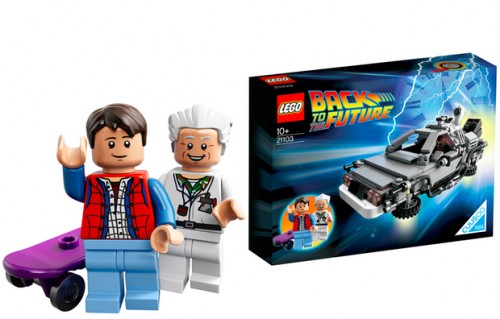 I am a massive Back to the Future fan. I have music from the BttF Overture as my ringtone, I own multiple copies of the trilogy on DVD and Blu-Ray (every time it comes out with new features, I buy it again), I have BttF shirts, a scale model DeLorean, BttF time machine Hot Wheels, etc. It’s my favorite movie of all time. So I knew when it came out I was going to order it. There was just no way I couldn’t have something as awesome as that in my collection!

On August 1st, I almost put in my order with Lego.com but then I thought I’d support a small(er) business and wound up ordering it through the fan site, BTTF.net instead. Now I’m not going to hotlink them because what was supposed to be a really great moment for this BttF fan turned into an upsetting experience that I felt was important to let other people know about.

First off, though I bought it on the 1st, they had issues with getting their supply from Lego. I got an email on August 5th explaining they were having difficulties. On August 8th, I got an email my package shipped. Checking tracking however, it really shipped two days later on the 10th and I finally received it yesterday, August 12th.

And while all of that delay was frustrating, it wasn’t my real issue with the transaction. This was: 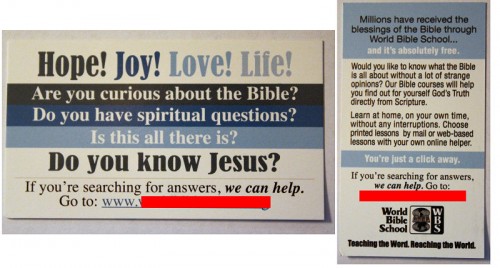 Religious propaganda included in my order from bttf.net

I tore open the box with glee and this shit came out. This stupid, stupid card selling some bullshit bible study. (I’ve removed the URL because they’re not getting free advertising from me.) I was blindsided! I never in a million years would have expected to receive Christian propaganda with my order! This was a long-established site. It had been around for years! I used to love visiting it for news and updates for fans of BttF (events, or news about actors from the movies, etc.) Just a nice, innocent way to keep up with my favorite film.

But this just ruined it for me. The entire experience was soured by this damned card. I feel violated. I feel betrayed. What was supposed to be this awesome moment is tainted by pushy bullshit that’s completely unrelated to the product or the movie. So I wrote a letter to Stephen Clark, who I believe is the founder of bttf.com and who had sent the emails informing me about the status of my order. I’ve copied it below:

I am writing because of a serious issue with regards to my Bttf.net order. It’s not the delay in the shipping (despite the fact I got a misleading notification that it shipped on the 8th but it really didn’t ship until the 10th and I received it on the 12th.) I understand that there can be issues outside of your control in terms of dealing with a third party supplier.

My problem is that I was so excited to receive my Lego DeLorean up until the moment I opened the box and found an absolutely unwanted, unprofessional and utterly inappropriate Christian propaganda business card advertising some bible school. It was the first thing that fell out of the box. I was literally disgusted. I did NOT order proselytization, I ordered a Lego toy. I do not appreciate receiving offensive garbage like this in what is supposed to be a professional transaction. Back to the Future has nothing to do with religion and I never would have ordered from you had I realized you were going to shove religion down my throat! It’s appalling that you would find this acceptable in what is supposed to be a business environment.

The entire joy and excitement over finally getting my long-awaited Lego DeLorean was completely ruined by this invasion of my personal privacy. What should have been a thrilling moment for a die-hard Back to the Future fan was needlessly soured and spoiled. I used to really look up to your site and respect the work you did in promoting and connecting Back to the Future fans but if this is the kind of thing you’re really doing, shoving your religion down fan’s throats and pushing a religious agenda, then count me out. I will never shop at your site again and I plan on blogging this incident to warn people away from supporting your business.

You should be ashamed of yourself.
-M. Turner

I also wanted to be sure to blog this so other people who do NOT appreciate receiving unsolicited and unwanted religious materials and proselytization can be warned away from doing business with bttf.net. Don’t buy from them if this is how they disrespect their customers.

Everyone is welcomed to believe whatever they want. But they don’t have the right to impose it on me. Especially when it’s unsolicited and what is supposed to be a professional, business transaction.

I’m trying to look at as-of-yet unbuilt Lego DeLorean Time Machine and remember how excited I was to receive it before I got hit with religious materials. And how it’s not Lego’s fault; Lego did not send me propaganda so don’t let the website’s bullshit ruin it for me.

But I’m finding myself disenchanted with it now. I look at it and think how I was sucker punched. I feel duped; like a fool for having given money to people who would do this kind of thing. It sickens me. And I don’t want anyone else to feel this way.

So for those of you who don’t appreciate this kind of pushy religious agenda, I urge you to spend your money elsewhere. Do NOT support bttf.com or bttf.net shop. I don’t want anyone else to ever lose the joy of what should be a fun item simply because someone can’t keep their personal beliefs to themselves where it belongs.