Love’s Birthday With A Side of Car Trouble

Blarg. Tuesday (the 18th) was Love’s birthday. We’re a little broke right now so we didn’t have huge plans to do anything. We were hungry so I figured we could make a special trip out to this little hole in the wall place he went as a kid with his grandfather for lunch. Problem was, 1/2 mile from getting there, my “Service Engine Soon” light came on and my car got weirdly shuttering with sputtering/hesitation when I tried to give it gas.

We parked and ate lunch (because we were already there and starving) then used google to find an Advanced Auto Parts 2 miles away to get them to hook up the machine to see what code it was giving to determine if it was safe to drive home. (We were quite a bit away on the other side of the Bay; about 20 miles or so facing long bridges and afternoon rush hour traffic.)

Chaotic fiasco at auto parts store involving TWO people trying to read the codes, after over an hour of waiting around finally led to random assortment of “recommended fixes” such as “Replace Mass Air Flow Sensor” to “Torque Convertor Clutch Solenoid Circuit Stuck On” to “Replace Transmission.” (I kid you not on the last one.) None of which was terribly helpful. 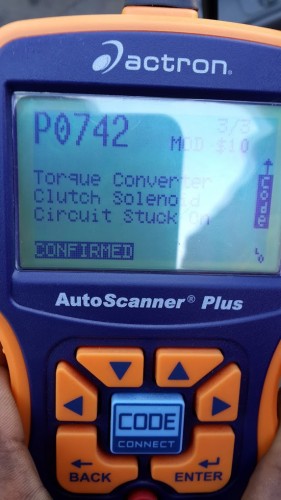 Is this the problem? Who knows! Not Advanced Auto Parts that’s for sure. 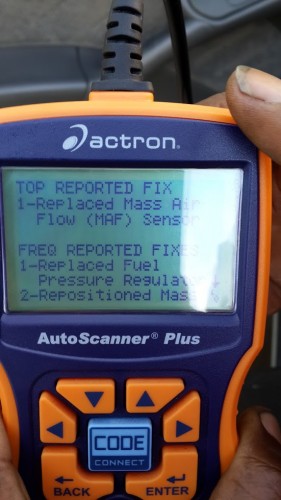 Or wait…maybe this? It’s a guessing game!

We had driven out to Orlando and back in my car on Saturday without problem. We had driven all over that day without problem. But we had experienced a weird sputtering right when the light came on so I wasn’t sure what to expect trying to get home. Plus, when I googled the “Torque Convertor Clutch Solenoid” (or “TCC” apparently), it is a common problem and if it doesn’t disengage, your engine will stall out under 45mph. Hrm.

Since it had only done it the once thus far, we decided to try and get home under our own power. And over an hour of white-knuckle driving later, we made it without any further issues, engine hesitation, etc.

But now I’m not exactly sure what’s with the car. And just because we made it home doesn’t mean I’m comfortable driving it lest I get stuck on the side of the road again. I think I might just have AAA pick it up here and tow it down to my mechanic and let him go over it. I would trust what he said and since I’m not even remotely sure if the readings the auto parts place gave me have any basis in reality, I need to get it checked out by someone who actually knows what they’re doing.

Of course, I really have no idea how much it’s going to cost to fix and car repairs were not in our already stressed budget. Which is very frustrating. (And of course, comes on the heels of my computer monitor blowing out totally dead last week and needing to buy another one which was ALSO unplanned expense.)

So Love’s birthday did not quite go as planned and for the moment, we’re short a car and not quite sure what it’s going to cost to get going again let alone what truly is wrong with it.