Last May, my Mom was out walking her dog when she spotted a tiny orange kitten on the side of a busy road in a canal. She caught the kitten and took it to the vet. It was healthy except for some (intestinal parasites which are common in outside cats) and she needed a foster home for it until it was free of the parasites and could go to a rescue group. I wound up being said foster.

But…well. I wanted an orange cat my entire life. Ever since I was a little girl. And for one reason or another all the kitties who came into my life were NOT orange. And I just fell in love with the little fluffball and we wound up keeping her.

Because she was so young when Mom found her, it was easy for the vet to give us a very accurate age. Counting back, it put her right around the beginning of April. I decided to make her an April Fool’s baby given the way she tricked me into falling for her. 😉

And so today, the little orange fluffer is one year old! 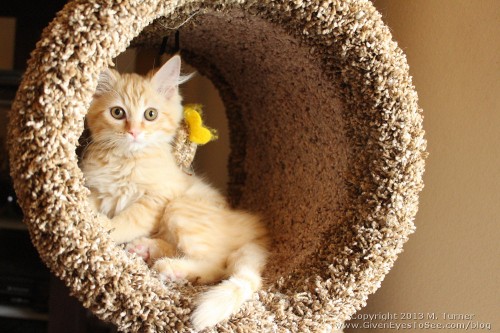 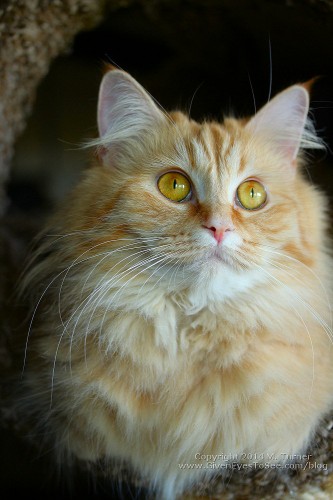 Ginger in the same “tube” of the cat tree just a few days shy of a year old, March 2014

And so you can see how surprisingly fluffy she really did turn out to be, here’s a shot of her from today doing one of her favorite things: sitting in the tub after I take a shower. (Hey, she was a canal cat so she’s always had a weird affinity for water!) 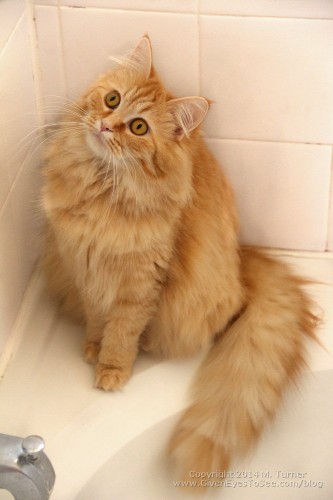