The Day the Element Died

First off: Love is ok. The car, however is dead.

It’s been a fucking morning from hell. My phone rang at 7am. I had been asleep 4 hours. It was my guy in a shaky voice telling me he was in an accident.

I threw clothes on and drove to his work. (About 30 minutes away.) On the way, the radio updates traffic and accidents and mentions the location he’s at. Holy shit, that’s him! 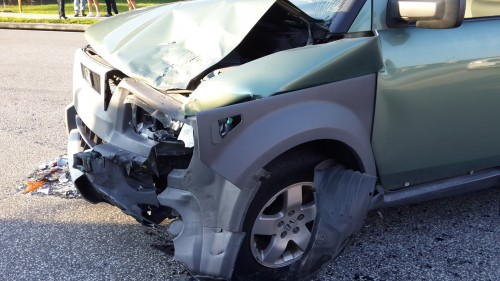 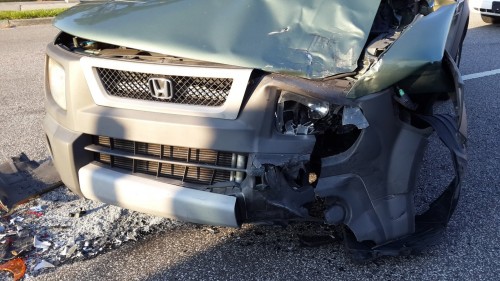 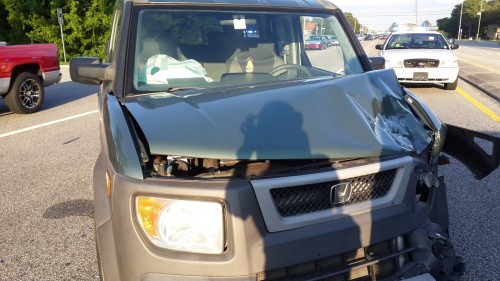 Here’s the other car: 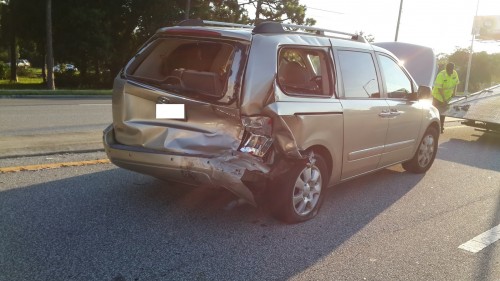 He went to McDonalds to get breakfast for the guys on his way in right next to work. Car shudders, brakes engage out of nowhere. He tries to them push the pedal to stop and it goes to the floor and nothing happens. He swerves but can’t stop and hits the car ahead of him corner-on instead of head-on at about 40mph. Air bags deploy. Engine cuts out. 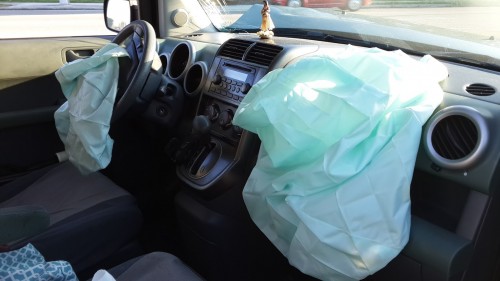 I get there about 7:30am. Two lanes of traffic are blocked, two cop cars on scene. He gets a $166 ticket with 4 points for “careless driving” because he rear-ended her. Insult to injury!

Paramedics had been and gone. Had his left hand wrapped up, suggested the ER for x-rays to check for a break.

Get the car dragged – oh dear gods, DRAGGED – onto the tow truck. Tell them to take it directly to Progressive claim center instead of our mechanic because it’s likely totaled.

We go to ER. Seatbelt bit hard into his left shoulder leaving a hell of a bruise. Minor cut on his wrist and jammed the hell out of his pinkie. X-Rays show nothing broken. 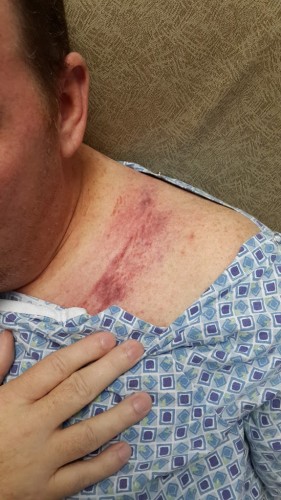 Progressive already looked at it since it’s sitting – dead – in their lot. Adjuster said $5300 after our deductible. More than I thought but nowhere near enough to replace it. (About only 1/2 or more of the replacement cost actually.)

The car was really special to us because our best friend Rand helped us buy it. Rand passed away very suddenly and unexpectedly 4 years ago. So in a way it’s like losing him all over again. He LOVES that car.

The end of the day though, the car did it’s job. It’s dead but he’s ok. And I’m trying to focus on that. But fuck it’s hard when I’m overwhelmed with what to do now? (I drive a 1999 Pontiac Grand Am. It’s got issues. So we’re going to need a replacement ASAP. And adding a car payment to our monthly budget..? Ugh, not sure how that’s going to work. Let alone how much insurance is going to go up for an accident + points.)

He’s sore. I’m in shock. So is he. It’s just been a hell of a fucking morning.