I believe I can fly…

…indoors, in a wind tunnel for my birthday that is! 😉

I can’t believe I forgot to write up a post about my experience with indoor skydiving that Love surprised me with for my birthday back on May 16th!! Indoor skydiving is something I’ve wanted to do for awhile now. I always thought it looked like so much fun. All the enjoyment, none of the jumping out of a plane and (potentially) falling to your death.

See, I’m terrified of heights. And I get violently sick on planes. (I haven’t flown since I was like 14 or something.) So there’s no chance in the world of getting me to actually skydive. But indoor skydiving? Flying in a wind tunnel? That sounds awesome. And it was! 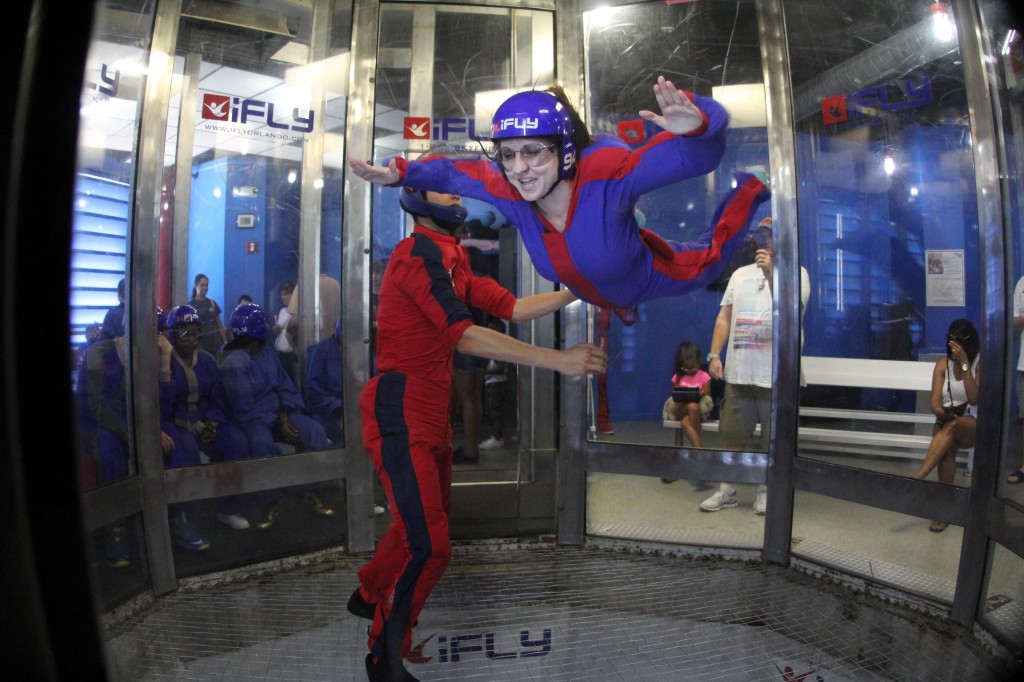 Me indoor skydiving at iFLY Orlando floating on air!

Late Friday night, Love surprised me with a birthday card. Inside was a print out confirming my reservation for the following day – my birthday, Saturday May 16th – at 4pm with iFLY Orlando. So the next day, we drove out for my adventure!

Located in Orlando out near Universal Studios, when you arrive, it’s a trailer, a platform with stairs and this big…tube! I thought it was all some kind of indoor thing inside a building but no, not really. You check in at the little trailer and then walk outside and up the stairs to the wind tunnel itself. The tunnel building has the wind tunnel at the center core along with viewing areas, classrooms, and such. So it’s pretty big on the inside. 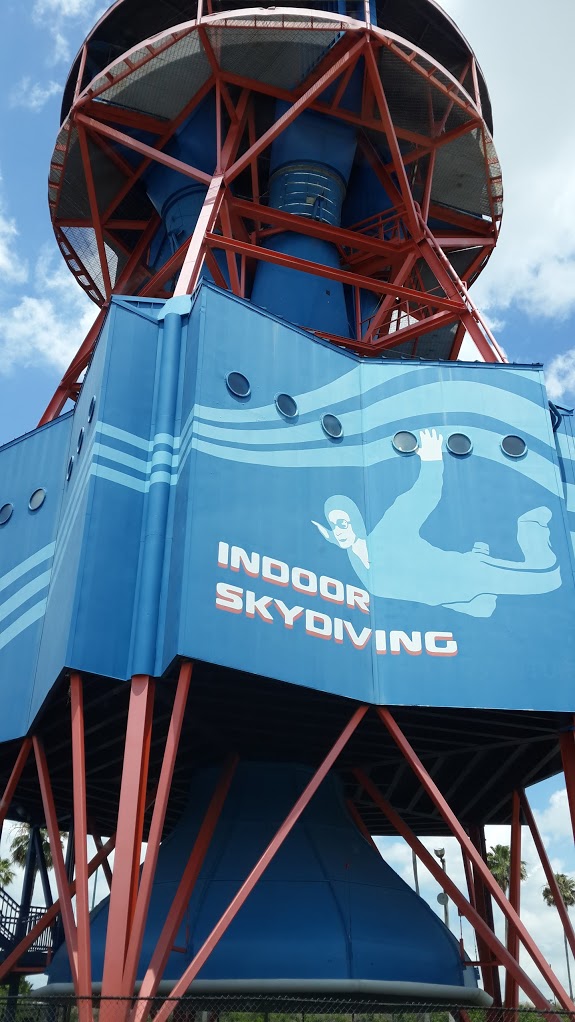 The iFLY Orlando wind tunnel in which you do your indoor skydiving and fly on air!

Being a first timer, my group all had a “class” talking about body position and hand signals our instructor would be using to help us position properly in the tunnel. (All of which totally fell out of my head in the excitement and RUSH of actually being in the tunnel! LOL) Proper position is super important or you won’t create enough drag for the wind to lift you. It’s why the instructor can stand there in the tunnel without blowing away while you fly. 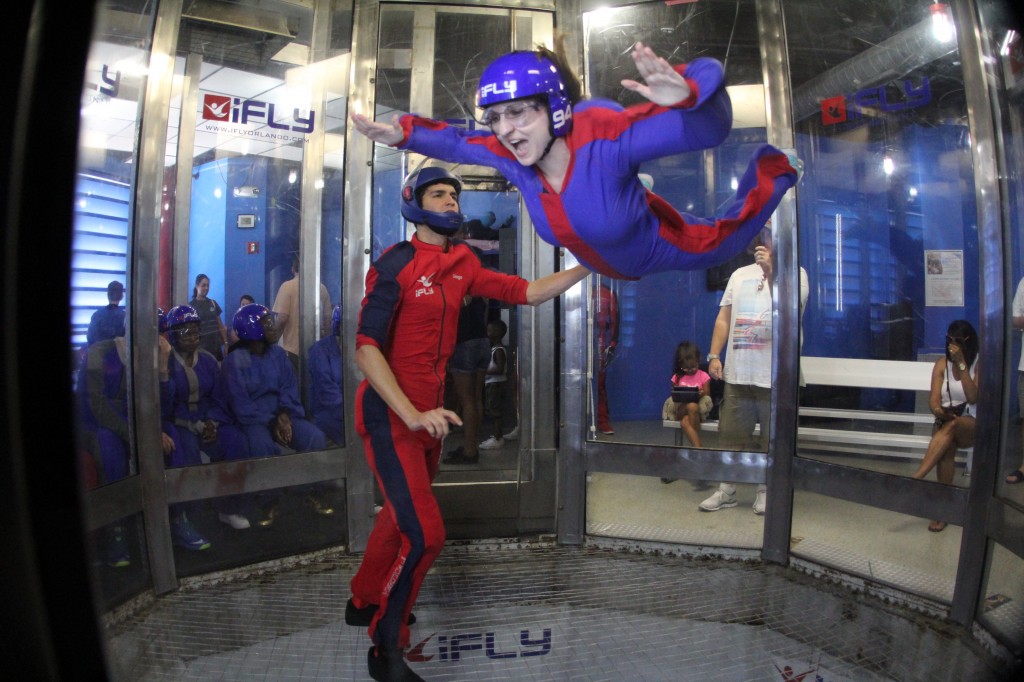 On the ground, it’s a super awkward position. It’s all about thrusting your hips forward (70% of your balance comes from there in the tunnel), putting your arms out at eye level in front of you (I kept inadvertently drawing them in rather than extending my arms outward) and keeping your chin up (the other 30% is in your chin and it was so hard not to want to look “down” when flying but looking down meant I would go down!) In the tunnel though, there’s no sense of how strangely your body is contorted.

A “real” skydive out of a plane is 45-60 seconds of freefall. I did two, 60 second flights in the tunnel. It’s approximately 2.5 jumps worth of air time. Having done it once now, I would recommend upgrading it to two, 2 minute flights (for a total of 4 minutes) because if you’re like me and you’re so excited you forget all the tips they told you in the classroom in the rush of it, you need the extra time to get acclimated to the tunnel. I spent half of both of my minutes getting myself into position so a little more flying time would have been better.

That’s not to say I didn’t have fun!! I think my face tells the story pretty clearly: 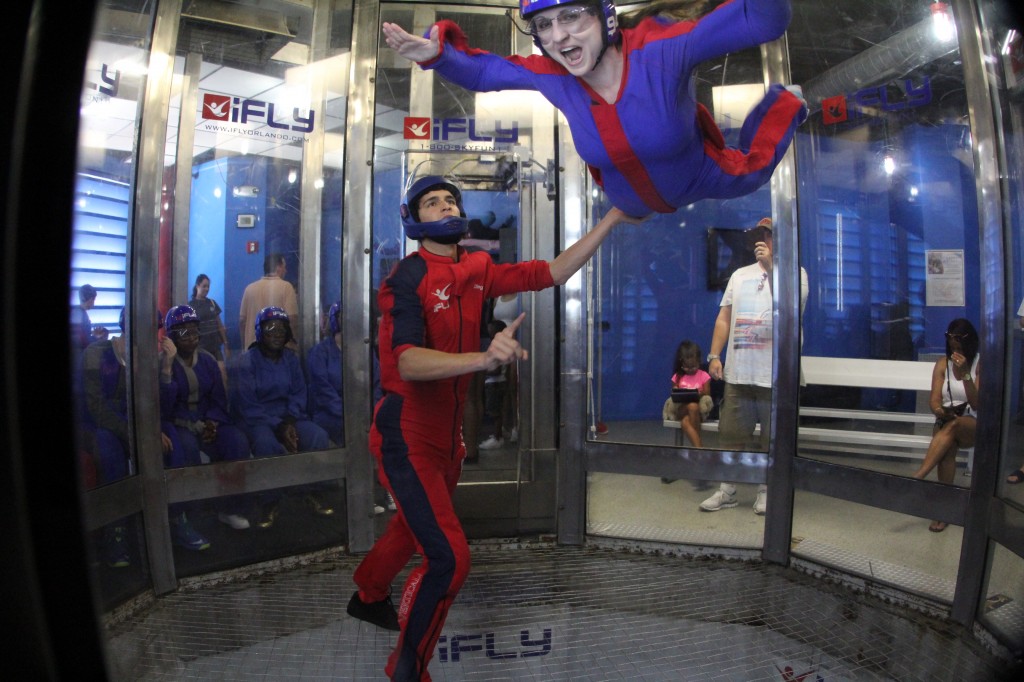 Because it was my birthday, they asked me if I wanted to have an instructor take me up to the top of the tunnel during the last 30 seconds. It’s normally $10 extra, but free for your birthday. I said sure. Turns out, they grab you and SPIN really fast as you shoot up to the top, then you’re still SPINNING as you come back down and then more SPIN SPIN SPIN as they take you back up again.

Ok, the up and down part: awesome. The spinning? Oh it got touchy there for a few seconds. LOL I had to close my eyes after the fourth or fifth rotation as I was getting urpy. Spinning and I don’t get along very well. So head’s up: have them take you to the top (about 30 feet or so!) because it’s awesome, but ONLY if you’re ok with spinning while they do it! 😉

Overall though, I cannot stress enough how fun this was!! If you have a chance to indoor skydive DO IT! So much awesomeness. And so unlike anything I’ve ever done before. Being in the tunnel is a rush. It’s so exciting and so cool and everyone there is really great. They all high-five you and encourage you and everyone in our group applauded each person as they came out because we were all having so much fun, even watching the other people in the group do it was exciting.

Few tips for a first-timer

If possible, opt for the two, 2-minute flights.
The extra time will give you more time to acclimate to the wind tunnel and give you more time to enjoy the actual flying part. 1 minute or 2 minutes doesn’t sound like a lot but when you’re in the tunnel, it both goes by fast and slow. It’s harder than it looks so more time is a benefit.

Your hair will totally tangle
My instructor joked, “free dreadlocks with every flight!” and he wasn’t far off. I put my hair in a low ponytail and you wear a helmet, but…it was still a mess. Put your hair up in a small bun and put some kind of handkerchief over it and THEN put on your helmet. Trust me, I had a rat’s nest after – even the hair that was under the helmet got snarled!

You will be sore the next day
Defying gravity is not free. And extending yourself against 140mph winds puts a lot of strain on your muscles. That’s a lot of force you will feel later. During the flight? Pure adrenaline. Next day? Felt like I helped someone move. My right butt cheek was especially sore as the instructor told us a lot of position comes from your butt as you thrust your hips outward. Remember too, I did 2 minutes total. If you take my advice and double your flight time, YOU WILL BE VERY SORE. But I still think it’s worth it for the extra flying time.

There is no sense of falling
If you’re like me and the sensation of falling makes you sick, terrified or miserable, you can still indoor skydive. You have zero sense of falling. Even when they took me up and down to the top of the tunnel and back I never had a moment of stomach-in-your-throat falling feeling. None. It’s blissfully like floating.

Plan on possible additions, add-ons and upcharges when you get there.
You will probably wind up wanting photos and video after your first flight too. The pics here are those taken from a camera within the tunnel. It cost me another $40 for the full video and half dozen photos but it was worth it. Just a head’s up there are a lot of add-on options like extra time in the tunnel, having them take you to the top, pics, merchandise, etc. Bring some extra money just in case you want to opt for options.

I cannot wait to do it again. I had so much fun and now that I’ve done it once, I feel like next time will be even better. People who do real skydiving train in the tunnels to learn advance positioning and all kinds of cool movements. The instructors make it look effortless and amazing and it’s like Cirque du Soliel without any rigging!

Google auto-awesome’d an animated my photos from the flight so I’ll finish with that. I’m pretty sure the excitement on my face sums this entire post up nicely.