A few months ago I decided I wanted to attend my first ever con: Tampa Bay Comic Con 2015. And if I was going to go, I was going to cosplay. Back to the Future is my all-time favorite movie (and movie trilogy) and 2015 is not only the 30th anniversary of it’s theatrical release (originally released July 3, 1985) but in Part II, 2015 is “the future” that they travel to. (October 21, 2015.) So it just made sense that my first ever cosplay should be Marty McFly! 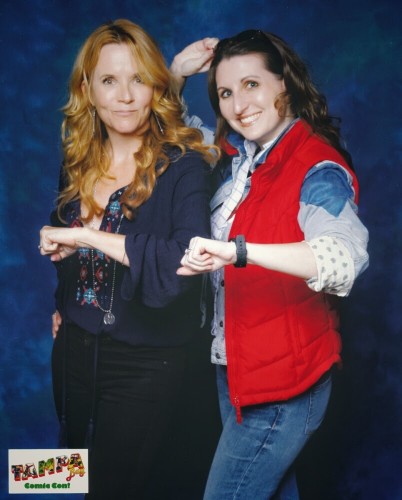 Lea Thompson (aka Lorraine Baines McFly from Back to the Future) with me in my female Marty McFly cosplay at Tampa Bay Comic Con, August 1, 2015.

Of course having an idea to do a female Marty McFly cosplay and actually putting it together is two different things entirely! Because as it turns out, Marty’s 1985 outfit is not only more complex than it initially looks, it’s also full of rare, vintage pieces – all in men’s sizing. And while Michael J. Fox may be small guy, he’s still a guy. And I’m not. 😉

So I needed to find suitable outfit parts that would still look like the original and yet be made for a woman. I was also unwilling to spend hundreds (or even thousands!) of dollars on this outfit and wanted to do it inexpensively as possible. It quickly became clear that I needed to approach this creatively.

In other words: this was going to take some work.

To start, this is Marty McFly’s famous 1985 complete outfit: 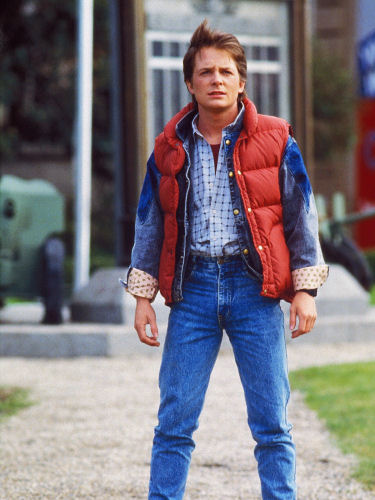 It’s a LOT of layers.

There’s also a ton of details like three pins on his jacket, his headphones and walkman, his marron Eastpak backpack, etc. I spent a lot of time looking up reference photos and learning all about what the original parts were so that I could find, make or modify compatible female pieces.

For example, the white and black windowpane button up shirt. There was a limited run of a reproduction version a few years ago by Shah Safari. Of course, they were in men’s sizing. And if you could find one on ebay, they were going for $100 and up. 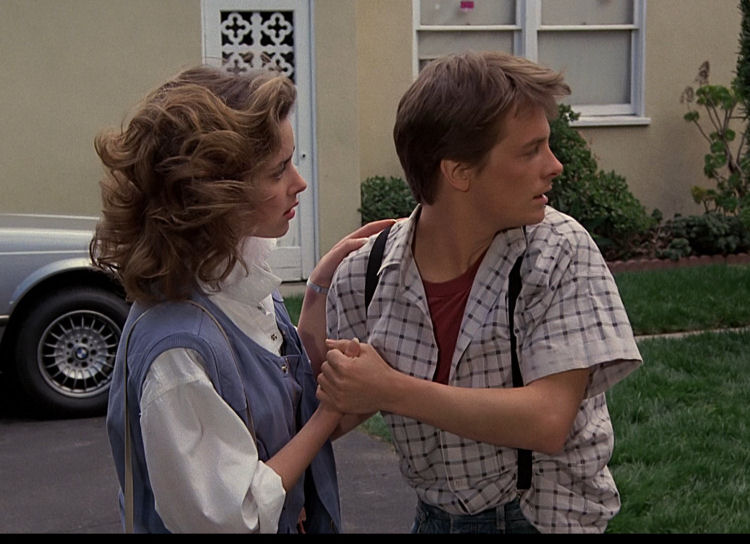 Marty McFly white and black windowpane shirt reference screenshot from Back to the Future. 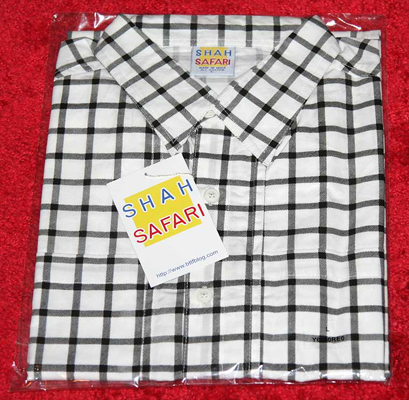 So I scoured the web and wound up finding this women’s shirt. It cost me about $10 shipped and looked really good. Plus, it had the added benefit of actually FITTING me as a woman! 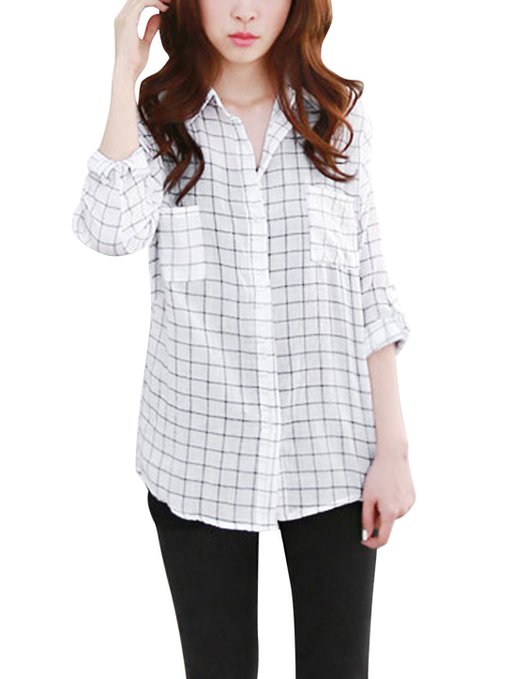 White and black shirt I used in my female Marty McFly 1985 cosplay costume. 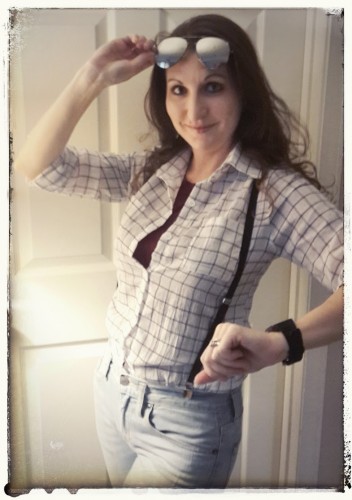 Me in my Marty McFly female cosplay in progress. (shirt, suspenders, jeans, watch but no denim jacket or puffer vest here.)

Next up was the puffer vest. I admit I never wound up finding exactly the right vest. I ordered four separate pieces over several months and settled on a red one. Yes, I know that it’s technically orange in the film. It’s a burnt orange color. Due to the lightning process and coloration of the movie, it looks red. (There’s even a big debate among casual viewers if it’s orange or red!)

The original is by Class-5. They went out of business in the early 80’s, so finding an authentic one is not only nearly impossible, it’s an extremely expensive proposition. Even if I did find one, again, it would be in men’s sizing and thus too large for my size 4 frame. 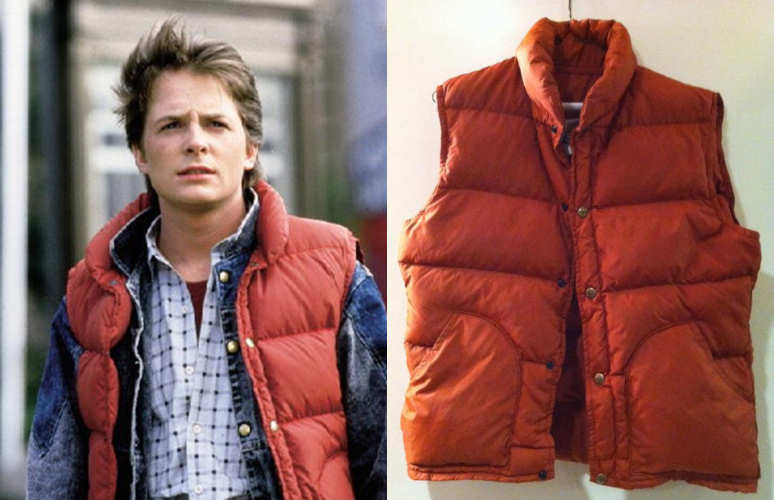 Marty McFly Class-5 puffer vest from Back to the Future

I wound up settling on a red puffer vest. I also did buy an orange one but it was too neon; much more of a bright safety orange vs the darker burnt orange puff vest original. I also bought a woman’s size one to help give it a little bit of shape. Puffer vests really do nothing for your figure so I opted for one that, while not screen accurate, looked good on me and still gave the impression and look of Marty’s original outfit. 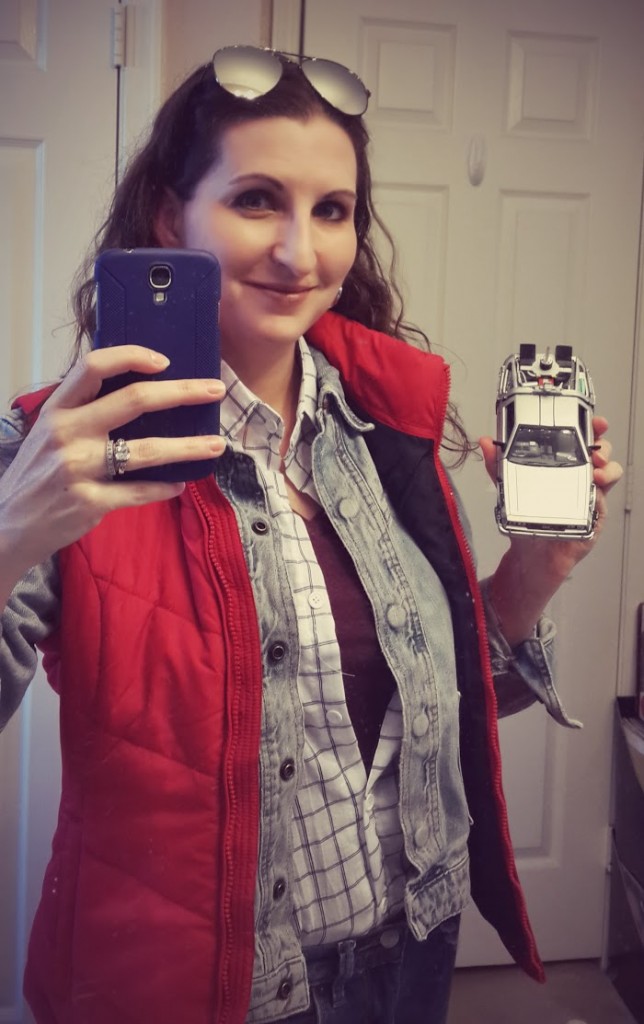 Me testing out some pieces of my in-progress female Marty McFly cosplay.

Like everything, Marty’s original shoes proved hard to find as well. Through research I found out the originals were Nike Bruins but they don’t seem to make this color combo any longer. 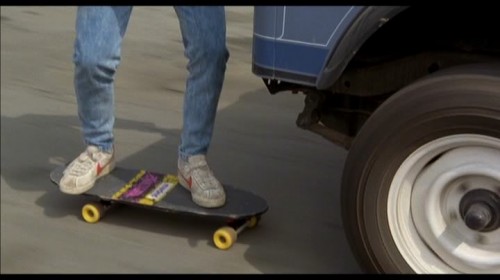 Reference photo showing the white and red Nike Bruins sneakers worn by Michael J. Fox as part of his Marty McFly costume in Back to the Future.

I spent time searching ebay and various websites but the few white-with-red swoosh versions I found were nowhere near the right size. I wear a women’s 6.5 which would mean I’d need a men’s 4.5 (which really is a boy’s size at that point.) I finally had a lucky break when I found a vintage pair of red and white Nikes IN MY SIZE that had a very similar look. They are labeled “ACE ’83” but were really an excellent find. 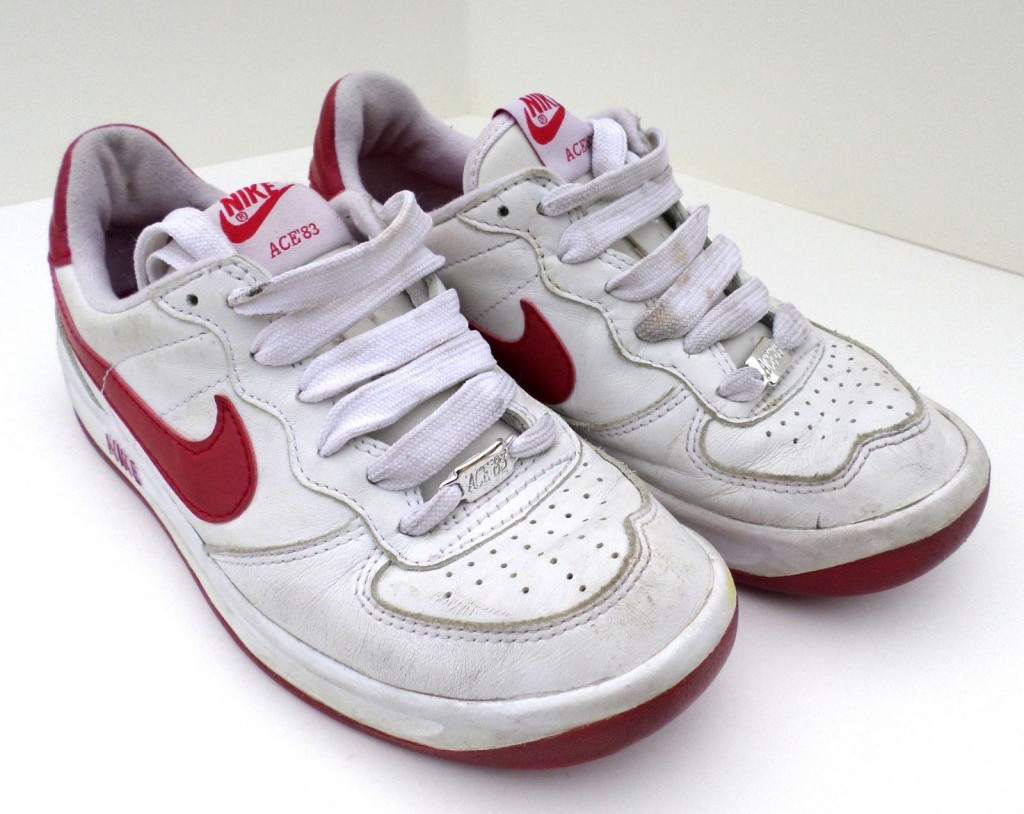 I couldn’t find women’s size Nike Bruins but I found these vintage red and white Nike Ace ’83 pair which were really close. (And my size!)

Marty McFly also has a very distinctive cassette walkman that he uses in the film. The original is a AIWA HS-P07 (or AIWA HS-P02 MII apparently one version was US and one was international but they both have the same styling.) These very rarely come up for sale and when they do…you guessed it. They sell for hundreds of dollars! I figured getting something with a similar “look” was close enough so I found this for about $10 on ebay instead: 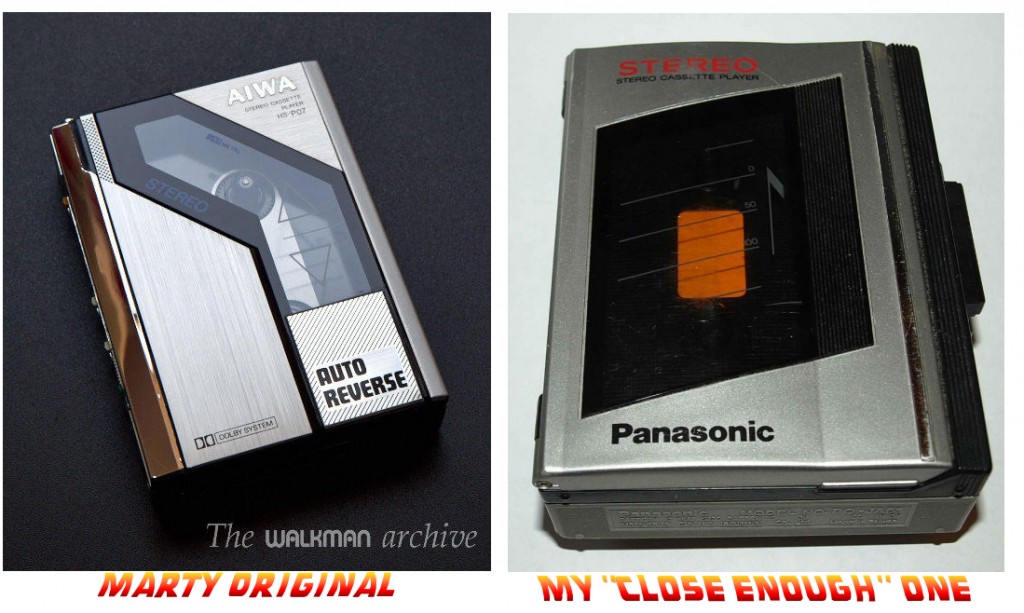 Back to the Future AIWA HS-P07 Marty McFly original style and my $10 version bought for similar look as part of my cosplay.

Marty wears a distinctively 80’s digital watch. When he’s trying to call Doc Brown from the payphone in Lou’s Cafe in 1955, it beeps. This was the easiest piece to track down because They still make basically the exact same model! Casio Men’s CA53W Calculator Watch. It’s available for about $15 on amazon! 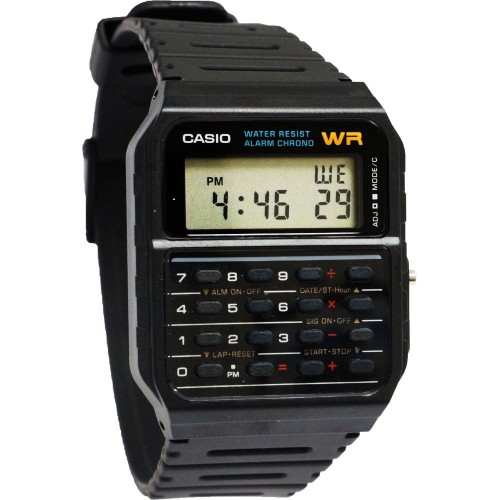 Marty’s backpack seemed like it would be easy, but it turned out it turned into one of those 30 years later challenges. The original is a marron Eastpak. A few years ago, they even re-released it as the Eastpak Pak’r Returnity Red but…those are sold out too. 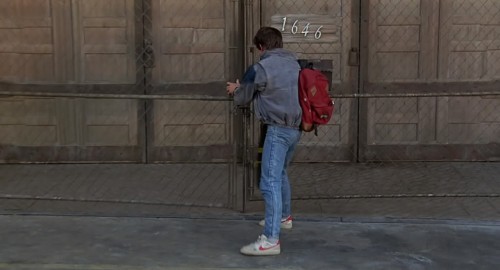 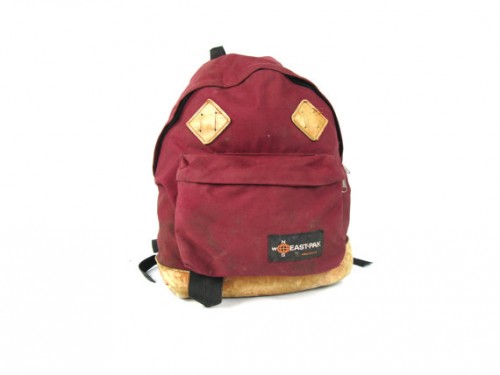 Eastpak Pak’r Returnity Red backpack – same as Marty McFly in Back to the Future.

I wound up buying a vintage Jansport bag. I took off the logo and added some handmade “pig ears” out of sued leather to give it the look. (The leather diamonds are sometimes referred to as “pig ears.”) Another $10 ebay find. 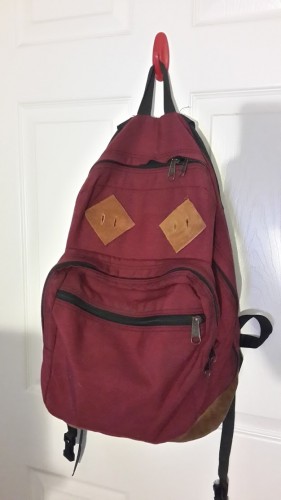 I made minor modifications to a vintage Jansport backpack to give it the look of Marty’s Eastpak. By getting the maroon color with suede bottom and adding some leather “pig ear” patches, it looked really good for very tiny investment.

Of course, the biggest challenge was THE JACKET. A one-of-a-kind, made by the studio just for the production, it was my biggest hurdle. And it deserves it’s own post so….to be continued! 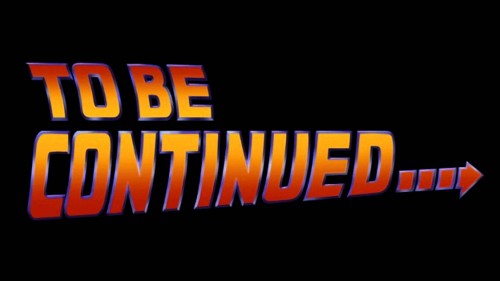