Yesterday, I had to have an MRI arthrogram on my left shoulder. It was a unique experience and I was really worried about it and I wasn’t sure what to expect. I spent a lot of time trying to google and research MRI arthrogram as well as what it was like and what it would feel like. Since I’ve now been through it, I thought it might be helpful for some others to read my personal experience having a shoulder arthrogram and MRI.

(If you don’t care about my specific history leading up to the procedure, feel free to skip down!)

The damned thing has been problematic for the better part of a year now. Last fall (2016), I woke up one morning thinking I had slept wrong on the arm, because the shoulder hurt, and it ached down my arm to my elbow. It hurt to reach, extend and stretch it, plus it hurt to lift weight with it. This problem went on and off for months, varying in intensity and aggravation until May of this year (2017), I finally made an appointment with an orthopedic doctor to get it looked at.

Initial diagnosis was “rotator cuff tendonitis with shoulder impingement.” Doctor gave me a cortisone shot in the shoulder (which HURT and made it ache REALLY BAD for like 2-3 days after, but which ultimately eliminated the “burning” sensation of pain I was experiencing in my upper arm down to my elbow.)

I went for 4 weeks of physical therapy. Saw some progress, but still had pain and weakness in certain motions. (Notably fully extending it outward and fully outward and to the right. ) Saw the ortho again after a month and he recommended giving it some more pt time, so I did another 4 weeks for eight weeks total.

At 8 weeks, we did see more improvement, but felt like I had hit a plateau and there was still pain and weakness. Ortho recommended I do an MRI, but not just a normal one, but an MRI Arthrogram.

What is an MRI Arthrogram?

So, “Arthrography is the x-ray examination of a joint space. During arthrography, a contrast material is injected to enable the radiologist to study the joint space that appears on the x-ray image. Body sites often studied by the various types of arthrograms include the wrist, ankle, shoulder, and hip.” (source)

And an “MRI (Magnetic resonance imaging) is a test that uses a magnetic field and pulses of radio wave energy to make pictures of organs and structures inside the body.” (source)

Put it together and it’s a two part process where you first get injected with a contrast (in my case, gadolinium) along with fluid directly into the joint (in my case, my left shoulder) in order to better visualize the joint during the MRI so that small tears can be more easily seen by the radiologist.

The entire procedure was about 2 hours in total. I booked the appointment at a local outpatient imaging center. I will note, it was a nearly 3 1/2 week waiting period to get it done because not every place that does MRI does arthrograms. They must have a Doctor of radiology on hand to inject the contrast.

My husband came with me as I was instructed I had to have a driver.

I arrived and checked in and got my lovely wrist id bracelet.

The next step was to go in and remove my shirt and bra and put on a gown so they could access my shoulder completely. They brought me into a room and had me lay down on the table. The doctor sterilized my shoulder and surrounding area. They use fluoroscopy which is a real-time, moving image version of an x-ray to properly position the needle. 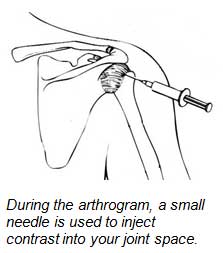 The doctor did an injection of a numbing anesthetic first. It pinched a little and there was a small, sharp bite of pain but it quickly went away. Then he slowly filled the joint with the solution of the fluid and the contrast. During this time, I was laying on the bed and they were using the fluroscope to monitor in real time to ensure the fluid went exactly where it was supposed to go.

After the injection was complete, they took a few still x-ray shots as well just in case as a backup in the event the MRI images were not clear.

The arthrogram was uncomfortable but not terribly painful. My shoulder felt “full” and there was pressure in my joint from the fluid but the numbing agent helped.

After the arthrogram part was complete, it was time for my MRI. Now, I planned ahead and made sure I wore nothing with any metal. Because MRI involves very powerful magnets, you cannot have ANY metal anywhere in the machine. (This means I also had to remove my glasses during the test.)

I was allowed to change out of my gown back into my sports bra and tee. (I picked up a seamless one like this specifically for this procedure. It is VITAL that it not have any snaps, clasps, or hooks because all of that can contain metal!)

I also wore a pair of yoga capri pants making sure there were no zippers, buttons, snaps, or metal.) It was much more comfortable to have some semblance of normal clothes during the MRI instead of just being in a gown, so I highly recommend you look for something similar free from metal to wear.

MRI is a very loud, very lengthy process. I laid down on the bed and the tech positioned my arm at my side and propped it up and positioned it in a plastic, curved piece. She then ran straps across my shoulder/arm and waist area, strapping me down to help keep me still. I found a google image of similar configuration (without the straps) 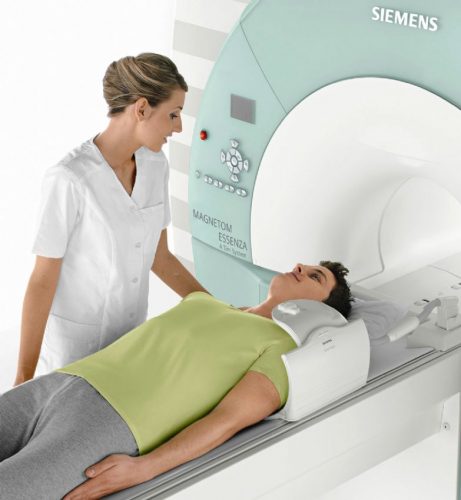 I was also given headphones with music playing and a squeeze bulb in my other (right) hand to press in the event of an emergency.

She left the room, and I slid into the MRI machine. The surface of the machine is only inches from you. It is claustrophobic – even for me who doesn’t really normally suffer from claustrophobia. It’s also EXTREMELY LOUD. I could barely hear the music (which was loud in the quiet room) over the machine. It makes a wide variety of clunking noises in different patterns. I had to lay perfectly still for about 20 minutes. One test had to be redone – another 2.5 minutes – because I guess I was breathing too much. 😉

Second round was harder. I had to lay with my arm up over my head with my hand behind my head. Then, she put this big foam piece over my chest and half my face! Then she strapped THAT down. Miserable. I had to lay still for 10 minutes – all the while, my shoulder was ON FIRE.

Thankfully, she said we got the scan and I was free to go after that.

After the arthrogram and MRI, I got to head home. My arm was sore and felt “full” from the fluid and contrast. I was also tired from the stress and anxiety of the day, so I took a nap when I got home.

When I woke up, my whole shoulder hurt really bad. The numbing anesthesia wore off and the pressure in my shoulder made it felt like the whole shoulder was being stretched too far from the inside making it ache something terrible. It was also swollen. I tried to take a photo but it’s kinda hard to see in the picture. It was definitely puffier than the regular side.

I took ibuprofen and iced the shoulder. It helped a little but really, it was just really uncomfortable. It hurt throughout the entire shoulder, both from the pressure as well as from the positioning in the MRI. The front shoulder, the rear into the shoulder blade and even into my upper arm all just hurt. It was definitely pretty miserable.

(When I had my hysterectomy, they pump your abdomen full of gas. This is true of most abdominal surgeries. It expands the area. They get *most* of the gas out, but some drifts – and it generally gets up into your shoulders. The pain in my shoulders the first few days after surgery was nearly unbearable and hurt worse even than the abdomen. The pressure after the arthrogram was similar to that kind of trapped air/gas pressure pain, though thankfully not as bad. But similar if you’ve experienced it.)

Thankfully, when I woke up today (the day after) the swelling has gone down and the pressure has eased. It’s still sore in the “over did it” sorta way but not as bad as yesterday.

Here’s some personal advice based on my experience to make the process as easy as possible. THIS IS NOT MEDICAL ADVICE. PLEASE REFER TO SPECIFIC INSTRUCTIONS BY YOUR DOCTOR.

I stressed out over the procedure for three weeks. I was scared and I didn’t know what to expect. Overall, it was uncomfortable and claustrophobic, and my shoulder hurt a lot that evening from the pressure of the contrast/fluid, BUT….it wasn’t unbearable. And with some rest and a little Advil you should be feeling better in a day or two.

(Then all you have to do is wait on your results!)

Hopefully, my experience has helped you understand the process a little and makes it a little easier on you.

1 thought on “My MRI Arthrogram Experience”