From the beginning, I knew something was wrong with Gracie’s mouth. It’s why I initially took her to the vet. But the vet felt the drooling was a nausea issue and got fixated on her abdomen and wound up sending me to a specialist for detailed blood work and ultrasound. All that cost me around $2,000 and a massive balance on my Care Credit that will be a burden to pay off. 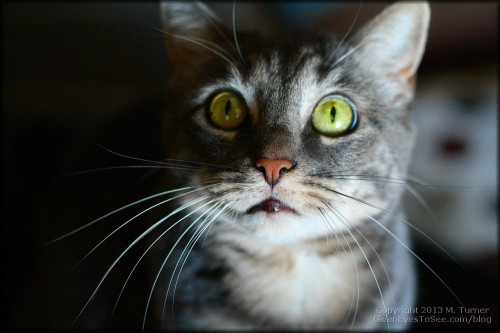 Gracie has such big eyes when she looks at you with her cute little face.

I told the vet I was worried about her mouth. I had observed her turning her head sideways to eat. I also told the specialist vet again my concerns about her mouth, detailing the abnormalities I had seen.

I was told she put up too much of a struggle to get a detailed look at her mouth. That she would have to be sedated and she wasn’t stable enough for that. I was so frustrated no one would just look at her mouth because it was so obvious to me something was wrong.

My sister works for a vet office and she spoke to her boss and explained the situation and she was willing to try and see what could be done to look at Gracie’s mouth. I brought her in yesterday.

It didn’t take any outlandish accommodations. Just wrapped her in a towel and the tech held her as the vet opened her mouth. She barely put up a struggle. Even I was able to look in there.

Gracie has a devastating mass in her mouth. It’s warped and almost folded in her tongue on the back. It’s why she drools and why she struggles to eat and drink and why her tongue has been “paralyzed” and won’t move properly. The mass is inoperable and clearly cancerous. All that testing for inflammatory bowel disease was moot. It doesn’t matter. Her mouth is going to be a death sentence sooner rather than later.

She has been given an antibiotic injection to help with secondary infection. The mass will/does cause necrosis in surrounding tissue. She was given fluids and will be taking prednisolone as well as a pain med to help keep her comfortable.

At some point, she won’t be able to eat or drink anymore. She’s already struggling with it because it’s hard for her to swallow (hence the drooling) and she can’t move her tongue properly which can lead to food getting stuck in her mouth.

The vet couldn’t give me a time frame but this kind of cancer is very aggressive and it could be days or weeks. It’s hard to say. Either way, we are going to very soon have to make the impossible choice to humanly end her suffering.

Love and I are utterly heartbroken and devastated. I’ve been crying since yesterday afternoon and I can’t see myself stopping anytime soon. She’s otherwise so alert and present and it just utterly breaks my heart to know we are so soon going to have to say goodbye. I’m also so furious that this has gone on for nearly 2 months and no one listened to me sooner that something was wrong with her mouth. While it’s unlikely it would have been any more treatable earlier, we could have saved her needless stress and procedures not to mention crippling debt I don’t know how I’m going to pay off. It was just all pointless because the cancer will kill her long before any IBD ever would.

I just can’t imagine a future without her sweet little self in it. And I certainly can’t imagine it happening soon. But it will. And I feel like I’m dying inside.

By request, I’m adding a donation link to the post for those who want to help me try and pay down these vet bills. Thank you in advance.
... other posts by miss m