Brief overview of this week’s events…

Monday – Hematologist
Hematologist appointment. Got there and told the receptionist as I was signing in that I needed to speak to someone in billing to sort out my insurance billing issue (they’re billing me out of network resulting in 100% due instead of in-network and 20% due.) I get called back and they want to draw blood. No, not until I talk to someone because damned if I’m going to have another $400 blood draw.

Wait. And wait. And wait more. Then get told the doctor is with a new patient and it’s going to take even longer. At this point, Mom and I have been sitting for over an hour and STILL haven’t even talked to the billing lady. We’re getting pissed. Finally, at about 1hr 15, we open the door and pretty much demand 5 minutes of someone’s time.

Bonny – the doc’s nurse – came in. I explained what was going on. She gave me some iron pills; something new called Hemax which supposedly is well tolerated in people who can’t normally take iron orally. She wanted to get me started on something while they wait on the insurance to get straightened out since we’re not doing the infusions until it’s sorted. (Because, right now, I have an $1,100 balance with them.)

After, talked to the backup billing lady (the main one was out) and explained what was going on and she’s going to try to talk to the corporate billing and get it resubmitted. We’ll see how it goes. I go back December 23rd for another blood draw to see if I’ve had any improvement on the Hemax.

Tuesday – Cleaning!
HUGE cleaning of the front room and dinning room area in preparation of a getting a tree. Worked our butts off. But got it looking good.

Wednesday – 8 weeks post-op, Hemax, tree, etc.
Today is 8-weeks post op. Doing good. Still have some random tenderness and aches around the incision sites (especially when I do a lot) but it’s nothing that a few ibuprofen can’t help. My incisions are still healing well. My belly button is still sensitive and after a few hours, pants get to be too much, but it’s a lot better than it was and I’m easily getting into all my pants again which is also good. 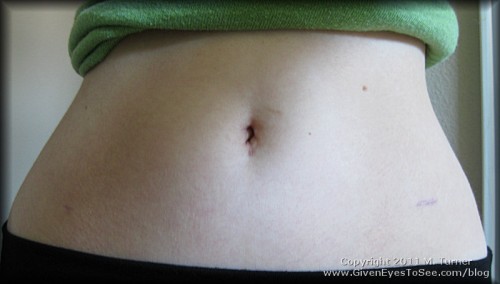 Today I also took the first of the Hemax. I’ve never had luck with various iron and I don’t think this is any exception. I took it with food (a bagel with peanut butter; both carbs and protein) and I also took some ginger in hopes of curbing any queasiness.

Unfortunately, it’s been making me burp for hours (seriously, I took it like 1pm and it’s after 7pm now) and every single time I burp, I taste wet, foul, metal. It’s just beyond disgusting. There are no words for how truly nasty this flavor is…and six hours later I’m really over it. I’m also not hungry and in fact, kinda sick to my stomach feeling so Love ate dinner but I’m just not feeling it. I tend to have violent reactions to iron and while I’m not puking, I feel pretty damned miserable. I’ll try it one more time at night instead to see if I sleep through the worst of it, but if it’s going to be like this then I’m not taking it. I’m already sick to my stomach enough as it is with IBS, I don’t need more reasons to be urpy.

We also went out for our tree tonight. As always, got it at Lowe’s. Seriously, they’re just great. Nice trees, good prices, friendly people. We used to pay like $75 for a tree at different lot and they were never as nice or fresh. And it was always haggling and used car salesmen-type experience. But for like $35, the trees are fresh every week, last all month and no one’s shady. It’s so nice.

The trees just came in overnight so it needs to drop out still but here it is: 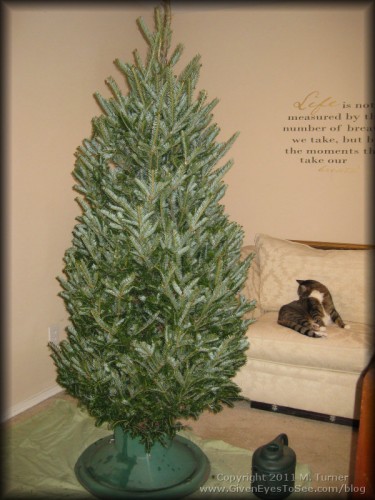 Tomorrow is Love’s surgery. We have to be there at 9am. It’s a surgery center nearby. Never been there but hopefully, it’ll be good. He’s nervous of course but I think it’ll go well. He’s off until Monday to give him time to recover at home. I’ll post more tomorrow when I know how it goes. Wish him luck, please!

Alright, well that’s about it for now. Me and my foul metal-taste are off to hang out with Love and watch some tv and relax. Night!