Lots of things going on lately so I haven’t had a chance to sit down and write a real entry again. So, as usual, here’s a recap.

Anniversary
Last week was the 14th anniversary of Love and I being together.

Aw… Seriously though, fourteen years! Holy cow, that’s a long time. One of these years we might even get to the marriage part. We’re finally engaged (as of last Christmas) but seeing as weddings are stupidly expensive….well, we’ll get there eventually. LOL

Outlet – Saturday
Saturday, we were going to take part in the free museum day. I had tickets printed for us to visit the Fine Arts museum in St. Pete but we got off to way too late of a start. So we didn’t wind up doing that. Love said he owed me an anniversary gift anyway, so we wound up driving out to the outlets down in Ellenton.

It’s just south of the Tampa Bay Area, down in Manatee county. You have to cross the Sunshine Skyway Bridge to get there. (Which, as I’ve mentioned before is very high and very scary. LOL) The lady at the toll booth said they had a jumper just the day before. Lovely. Did I mention it’s like the #3 most popular bridge in the country to commit suicide off of?

Love was afraid of getting an attack while driving so I drove both ways. Talk about sweaty palms!

I picked out a really pretty Fossil watch. It was marked down additional discount off of the already discounted price. Score! Here’s a quickie cell phone shot: 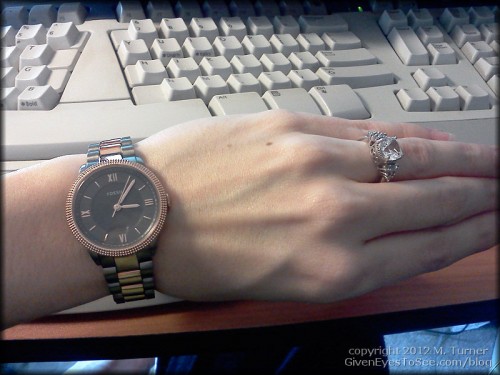 This is apparently the “Mini Sydney” from Fossil in “Smoke and Rose” two-tone color.

Vertigo – Sunday
We were running some basic weekend errands like getting cat food and some household supplies, when Love suddenly didn’t feel well. We went home and he sat down on the couch a little, but then got up and got sick. He proceeded to then throw up non-stop for the next 2.5 hours or so.

He got another one of the actual vertigo attacks. (As opposed to his migraines which make him seasick feeling whereas the vertigo makes him feel like he’s spinning.) He finally stopped puking about 7:30pm or so and fell asleep.

This worries me because this was his second vertigo attack in less than two weeks. We just saw the neurologist last Thursday and at that time, with only one attack, no big deal. But two..? Is this turning into a new problem now? Gods I hope not. But once is a fluke, twice you start getting worried. He lost the entire evening Sunday because of it.

A/C Repairs – Monday & Tuesday
Monday, they came out to fix the a/c in the apartment. Again. This has been an on-going issue for literally as long as we’ve lived here. Recently, we’ve discovered several things that were done wrong at the time of the install of the new system back in 2005, such as there being a lot of moisture left in the lines which prevented good pressure readings of the freon. Well, we discovered after the last freeze-over last week, that the main copper pipe that carries the freon into the wall unit was severely kinked and bent. Someone crushed it and just left it that way causing a restriction.

So they had to cut a hole in the wall in order to access it, then cut out the broken part of the pipe and solder in a new section. Made a terrible mess.

Messy, messy look into my air conditioning unit as it’s being fixed.

Today, he came back and painted it up so it at least looks almost new again. Hopefully, this will finally solve the problem. To have this many years of a/c problems has been completely absurd and utterly frustrating. (Not to mention expensive as we either had to cool the apartment back down after it breaking, or just the cost of it running inefficiently all these years.)

And that’s about that for the past few days. I think I’ve rambled on enough so I’ll end this here.