The month of December went by in a complete rush this year because of being so busy in my shop. I had a record 103!! orders for the month of December alone! (And many of those had more than one item in the order!!) It meant though, that I didn’t have as much time as I normally do for things like sending out cards or baking cookies.

Before I knew it, it was Christmas! The Saturday before (December 22nd), Love and I got together with his brother and his brother’s girlfriend at their parent’s house for a family dinner. We exchanged gifts and had a nice evening. Christmas Day of course is always crazy and hectic; starting off with our own gift exchange here at home, followed by an hour+ drive to Love’s cousin for family gathering #1 and then down to my Mom’s for family gathering #2.

Here’s a shot of the tree complete with all the presents around it on Christmas Eve: 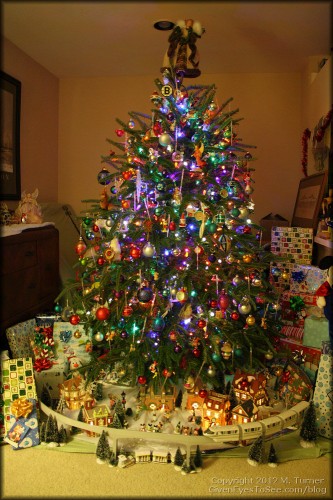 When you have a village under your tree, you need to get creative in where you put your presents!

I got Love a signed, first edition of Sacre Bleu by his favorite author, Christopher Moore, some wireless headphones so he can watch tv/play games when I’m asleep on the weekends without waking me, and some shirts. He got me a watch, a wallet, a jacket and a few other little things. It was nice.

Here’s my Mom’s tree with presents: 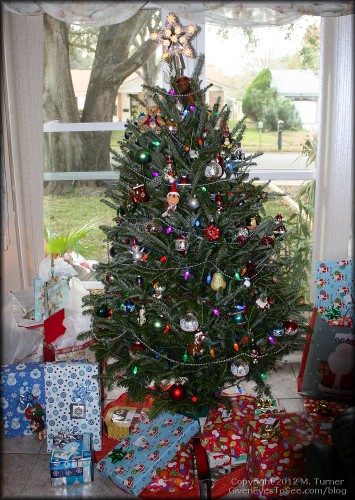 My Mom’s Fall
Unfortunately, the day after Christmas, my mom slipped on a wet mat and fell. She bashed her shoulder into the tile wall. She wound up getting sick from the pain meds and ended up spending New Year’s in the hospital. It also took them until yesterday, January 3rd, to tell her that she fractured her humerus. (The large bone in the upper arm.) So my poor Mom has had a really rough time of it this past week and is in pain and can’t do anything (including drive) for at least the next two weeks. My sister and I spent the day yesterday taking down all her Christmas decorations and getting her house back in order. We’ll be helping with the housework and stuff too for the next several weeks while Mom heals. It’s her right arm of course, so she’s not only down a hand, but her dominant one too.

New Year’s Eve
Love and I decided to actually do something for New Year’s. Normally, we sit on the couch and he doses off. LOL We have our passes so we figured we’d head out to Disney. It’s truly a crazy amount of people there as you can imagine for the day, but we headed out later and got there around 7pm. They did two fireworks shows including an AMAZING one at midnight for the New Year.

The video features my Little Visitor, Ihaka (it’s a swap on Craftster where you exchange a small plush and take them on a tour of where you live for a few months, sending back souvieners and a scrapbook of the adventures. It’s SO much fun!) but it gives you an idea of the amazing show. The fireworks literally go off around you in a complete, 360 circle!

They had a DJ and music playing throughout the entire park the whole night. After the fireworks, everyone made a mad rush for the exit. We didn’t. So the park got nice and empty almost immediately. We even got to ride a few rides with almost no wait. 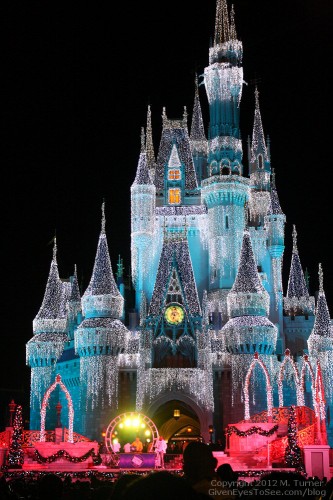 DJ on the stage in front of Cinderella Castle, New Year’s Eve 2013. 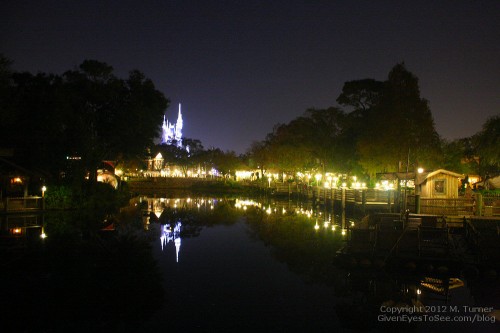 The entire month went by so quickly though and it’s all a bit of a blur now. I’m sure I’m missing things but I at least wanted to give a quick overview of Christmas and New Year’s. I’ve got a bunch of items to update in my shop so look for another entry later with some of that.

Hope everyone had a lovely holiday season and Happy 2013!