I’m happy to say my two-week post hysterectomy day came and went and brought with it a nice relief from pain. My pain has changed from an all-encompassing deep ache to a more shallow general soreness. It’s much easier managed with ibuprofen and I went the entire day yesterday without a single painkiller. Just two doses of ibuprofen. That’s a first! Most evenings I get more sore and take one to get the edge off but last night, I didn’t. And I’m still tender and sore but not bad. Manageable. If things keep progressing like this, I might actually be able to drive again soon! 🙂

Love brought home a dozen, colorful – and amazingly lovely smelling – roses for me yesterday. To help keep my spirits up since I’ve been so confined to the apartment these past few weeks. He said I needed some color and brightness in my day. (He’s so sweet.) 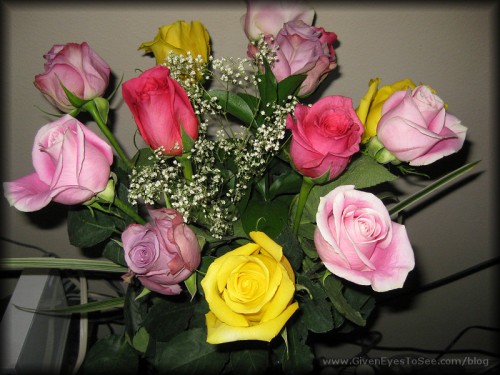 My “I am ObamaCare” post on Facebook has had 26 30 shares since yesterday. (It went up as I’m writing this entry!) Jeez! Last night, it had like a dozen and since then it’s doubled. Surprising how things like that work. I’m glad though if it helps get the word out that these are issues affecting REAL people. And while things like PCIP isn’t perfect or cheap, it’s still better than being faced with a $40,000 surgery and no resources like I was when this started. It’s at least a small step in a humane direction. Access to medical care and the help you need should be a given, not an exception. Anyway…I was just glad to see it getting some attention.

Well, it’s Friday and normally weekends are for fun but of course, with the healing, there’s still a lot I can’t do. (And I still get very tired very quickly. Afternoon naps are still on my schedule!) Maybe I can venture out to a store or something this weekend to get out of the house a bit. Now that I’m feeling a little better, it’s easy to overdo it but on the other hand, you need to push – at least a little – to get your stamina back. So we’ll see. Still no Disney for now (and curses! the weather is beautiful for it!) but…it’ll still be there next month. LOL

Alright well, that’s the update for now. Oh, I’m going to put another updated picture of my healing tummy behind the cut. It’s looking SO much better. I’m getting a lot more of the glue and lint off too. My belly button I’m a little worried about only because the scabs seem to be separating away from the skin a little (and NO I’m NOT poking at it) and it seems like it’s a little raw under the scab but, I’m leaving it alone and hopefully it will be ok. Just that incision looks the grossest by far. I’m going to include a close-up of that incision too. Nothing else besides the pic under the cut (it’s not graphic but it’s a little gross with the belly button incision so cutting since some people don’t want to see) so if you want to skip it, you’re not missing anything else. 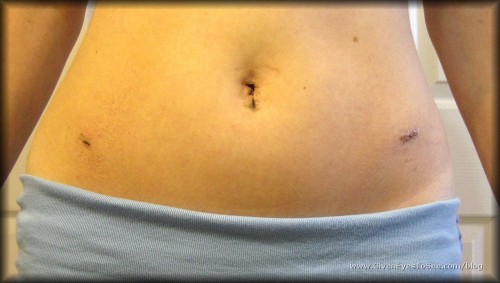 This is from last night, day 15. (Thursday, October 20th) Besides the fact I’ve gotten a lot of lint off, you can see that things are really healing up nicely.

Close-up of the belly-button incision. See how the scab seems to be pulling away from the wound? I’m leaving it alone so hopefully, it’s supposed to be doing that. I’m just worried because this one looks much more “icky” than the other ones which are totally healing up nicely. There’s still also a lot of glue residue in the area but I don’t want to pull it off and risk pulling the scab off with it.