I’m a long time BzzAgent. BzzAgent is a site where you can sign up for various campaigns and if selected, you get to try out the featured product for free in exchange for honest reviews and word-of-mouth about the product. I’ve gotten some great campaigns over the years and currently, I’m testing out the Philips Satin Perfect Deluxe Epilator. (MSRP $149 but save $20 on Amazon)

I remember when I was a little girl hearing about the first epilator (the “Epilady”) which apparently came out around 1986. Back then, though I didn’t know much about that kind of thing, it scared me. I mean, it made a loud noise, had some metal coil and it apparently ripped the hair out of your skin. That was not something I wanted to do when I grew up!

So it was kinda funny when I got the invite to the campaign. I mean, 1986 was a long time ago. I’m a woman now and moreover, I live in Florida which means wearing shorts year-round. My skin hates things like Nair (rashes, burns and no hair removal) and waxing was just never up my alley. I’ve always just shaved my legs. But that means hair removal every other day. Forever. Because if I miss it, I’m wearing pants.

And so, I thought I’d try it out. I was selected and my kit arrived about two weeks ago. Here’s what was in the box: 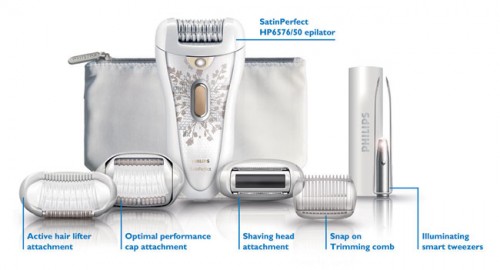 First off, it comes with a cool set of travel tweezers. In a metal tube, with a mirror and a light. These things are brilliant. Such a nice bonus.

Second, it comes with a variety of head accessories to help trim, lift and assist you with your epilating if you’re new to it. And all of it fits nicely in the zipper pouch.

Opening the box, the packaging looked great, the unit itself felt solid and looked well made. Everything felt substantial. Turning it on, well it’s still loud. I often wonder what my neighbor thinks I’m doing when I’m using it since the walls between apartments in the bathroom is really thin.

Which brings me to….does it hurt? That was my first question of course! And I know it has to be yours too. And the answer is yes. I mean, come on, it’s pulling the hair out by the root. Yeah it’s not pain free. But, it’s not torture either. It stings. I mean, it stings a lot but it’s more like a surprising sting where you go, “ow! ok we’re good… ow! ok, not so bad…. ow!” in little shocked moments over and over.

I found that the first time I used it, I kept flinching. I was anticipating the sting and kept pulling away, just touching it for a moment to my skin, then pulling back. (As opposed to a continuous stroke.) The fear of it hurting was almost as bad as the sting.

I admit, I still haven’t done both my full legs yet. I’m working up to it and it honestly is getting better. I’ve manage to do both of my lower legs as of today. I find I have a low tolerance and just want to stop, then I do, but then 2 minutes later I tell myself I’m being a baby, it wasn’t so bad – so I go and do some more then stop again. Repeat several times until I bully myself into pushing through. I know I’m probably not really selling you on this so far but I’m trying to give an honest experience as opposed to glossing over the hard parts.

Now, it’s possible to have redness and irritation from using it. The manual warns you this might happen and to minimize it you can exfoliate a few days ahead of time and also use it at night so any irritation will clear up overnight. I had some red “welt” looking spots scattered across my leg the first time I did a big section. But, even my very sensitive skin, it only lasted about an hour. 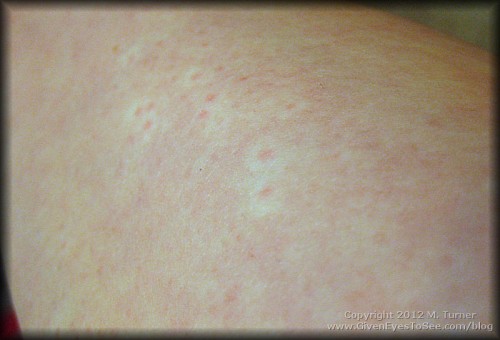 In order to try it, I purposefully skip shaving and try on the 3rd or 4th day past shaving when my hair is long enough not to be just barely-there stubble but not so long as to need to be trimmed prior to epilating. (It comes with a trimming head as well since there is an optimal length for using the unit.) My leg hair is what I’d call “medium.” It’s not baby fine but it also doesn’t grow in like thick horse hair stubble either.

The areas where I’ve used it so far are still really smooth. I’ve been trying it for about a week and a half now in a few attempts so I can definitely see the areas where it’s successfully worked. Since I’m new to it, I’m using the attachment head meant for helping make it easier to use.

Cons
I find I have some problem with certain areas, especially directly on the tibia bone right on the front. It doesn’t seem to want to “catch” there as much. I also am having problems with getting it to catch along my kneecap but that might be due to the head I’m using. I might need to try doing it straight to see if it works better on the boney areas.

Another con for me is that it’s NOT waterpoof. Meaning I need to either shave pre-shower (so I can touch up with a razor in the shower any areas I missed and/or wasn’t brave enough to finish yet!) or try it post-shower (when my skin is dry but my pores are more open but then not be able to touch up with the razor.) That’s a downer for me.

It also takes me longer than shaving right now, though that’s most likely because it just takes me longer since I flinch a lot and stop-and-start more than I do when shaving.

Pros
The upside is that it is cordless and has a long battery life. I charged it when I got it and haven’t charged it again since but I’ve used it a few times.

Another upside is that once you get the bulk of the legs done, if you keep up with the little touch-ups, it’s going to be quicker and less painful since you’re not going to be redoing all of it at once. And you stay smooth 3-4 weeks!

Uses
The manual tells you that it’s “below the neck” hair removal but I’ve yet to try it on my underarms and I don’t think I will. I have VERY sensitive underarms that can’t stand being touched, so I can’t imagine how much I’d hate the epilator experience there. (But that’s my weird quirk.) I also don’t know that I’d go full Brazilian with it though of course that’s an option. I might work my way up to some bikini-ready skin…but we’ll see. I’m still working on my legs right now.

It’s supposed to be comparable to waxing. I can’t say since I haven’t done that but I can say that it’s not pain free but it’s not horrible. I mean, it hurts but I really do love the results I’ve gotten so far and the thought of having smooth legs for weeks is a HUGE draw. So it’s pain with a reward. And really, doesn’t that sum up most beauty rituals we women have to do anyway? LOL

Is it for you?

Final Thoughts
I’m sticking with it for now since I really do like the results. Supposedly it gets better the longer you use it and the hair grows back thinner which also makes it hurt less. So we’ll see. But that’s where we’re at for now and concludes my first look, hands-on with the Philips Satin Perfect Deluxe Epilator!