My Day With CNN

Ok, in all honesty, it was really my day with one reporter/photojournalist from CNN. Not like I had an entire satellite truck and crew here or anything!

He got here a little after 1pm and was here until almost 5pm. He spent about an hour interviewing me first. This is a photo I took from my vantage point during the interview: 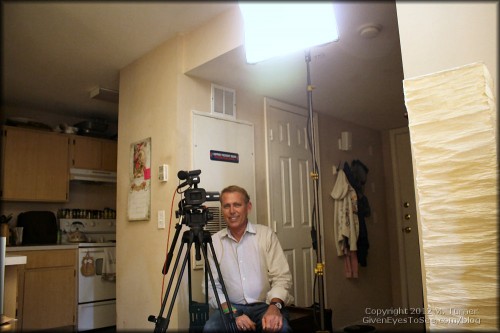 John Couwels from CNN interviews me
(I told him it was only fair I got at least one picture of my own!)

He asked me a lot of questions about healthcare, the Affordable Care Act (“Obamacare”) my experience, my thoughts on the subject, and well, I talked a lot. LOL He said at the end that I did a great interview; that I am obviously passionate about the subject and very knowledgeable. He was impressed that I knew all the facts and stats of the issue.

After that part, he got both still photos and video of me creating some of my tree of life pendants as well as me taking photos of my trees. (Him taking pics of me taking pics. LOL) Then I was showing him some things on my blog and some of the places I was featured on the Official Barack Obama Tumblr. He took some more video footage of me on the laptop at the counter in the kitchen and talking about a few other aspects of my image and it’s online presence.

So after all that, I asked him the big question everyone wants to know: when will it be seen? He tells me that he had been talking/texting back and forth with his boss and if the interview went well (which apparently it went great he said) that it might end up as a Sanjay Gupta story.

Um, yeah. So if it goes that way, it will be on rotation on the channel. Sanjay Gupta would basically anchor it and go to the interview. Apparently, it might be like a 2 minute spot. Which is a LOT in TV time.

And now I’m really freaking out! Because it’s a much bigger deal to be a story on rotation from CNN’s chief medical correspondent than just a human interest story filed by an Orlando-based journalist.

This could seriously get a lot more complicated and more national attention then I planned. Which, I have to admit, kinda scars me. For as much as I want to help bring this issue to a wider audience, I also don’t want to find myself the next Sandra Fluke and being attacked personally for sharing my story, you know?

He’ll email me with the info when it’s finalized but it could be as early as Wednesday or Thursday that it will be live. The Supreme Court’s decision on the legality of the ACA is due Thursday so they want to get it on before or during that time.

I think I did good. I think I represented myself well. But this is a hot-button topic and I’ve already had some really hateful feedback as a result of the image itself going viral.

Walking around the supermarket today getting dinner with Love after my interview, it was surreal that I had just concluded being interviewed by CNN. Felt like I should tell everyone I saw or something. Heh.

But now…I’m kinda freaking out. I can’t help but feel like this might be a calm before a storm depending on how this plays out.