The Facts About Medicaid And Other Health Care Options

So many people are so badly mistaken on what programs and options are out there for low income individuals and/or households as it pertains to health care options. I’ve literally lost count of the number of people who “know for a fact” that I and millions like me could have simply qualified for other programs such as Medicaid. Ignoring the fact, I did apply to them all and was turned down, so maybe I have a little bit of personal experience with the issue, why not look up the actual facts if you’re so certain?

Oh yes, because if you did, you’d see how few options people truly have. 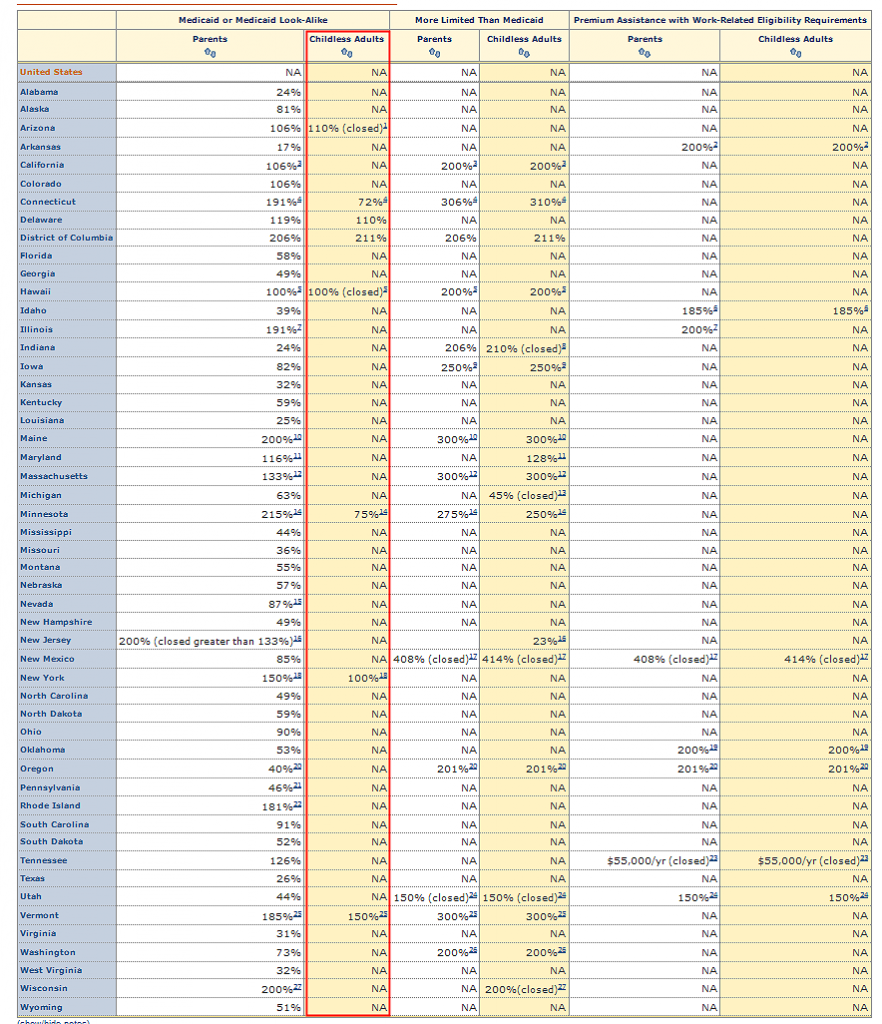 Income Eligibility Limits for Working Adults at Application as a Percent of the Federal Poverty Level (FPL) by Scope of Benefit Package, January 2012

You can click this for larger, or see the original source HERE

The first thing I’d like to point out is the column I’ve highlighted in red. This is the eligibility for CHILDLESS ADULTS. You’ll notice that only EIGHT states even allow an adult without kids to apply for Medicaid. Eight out of 50 states. The other 42 do not even offer Medicaid if you’re not a parent.

Florida is one such state. It’s why when I applied, I was denied. My condition made it impossible for me to get pregnant and the treatment would remove my ability to have kids permanently. How ironic then, that I was denied for being childless. 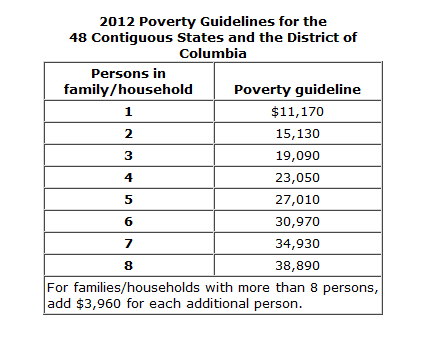 You can view the original page HERE

Let’s say I had a kid though. In Florida, in order to be eligible, I’d need to make 58% of the Federal Poverty Limit in order to get Medicaid. That means as a family of two, I’d need to make no more than $8,775.40 in order to be eligible. As of right now, Florida’s minimum wage is $7.67/hr. The average full-time employee works 2080 hours a year. That’s close to $15,954/year or about double the income limit. How in the world can anyone survive on less than half of minimum wage a year with a child? And yet, that’s what it takes in order to qualify currently for Medicaid in the state of Florida.

When people say that those without insurance are just living these high-roller lifestyles with fancy cars and big, expensive homes and such it’s simply not true. People without health insurance don’t go without out of choice; they go without because they lack any choice in the matter. All the choices have been taken from them.

This perception that the uninsured of America are all just lazy and looking for a handout is a dirty lie propagated by the richest 1% of this country against it’s poorest citizens. It’s socioeconomic stereotyping, hate-mongering and a down and is meant to divide people against each other rather than bring them together for the common good of all.

Facts about the cost of insurance:

Premiums varied considerably by state, reflecting a variety of factors, including premium rating and underwriting rules, differences in health care costs, demographics, and consumer benefit references. For example, average annual premiums for single policies reported in the survey ranged from $2,606 in Iowa to $6,630 in New York.*

Employer coverage is subsidized, and nearly all employers pay at least half of the premium. On average, employers pay 83 percent of the cost of single coverage and 73 percent of the cost of family coverage. Therefore, employees have a strong incentive to sign up for employer coverage, regardless of their health or financial status. When nearly everybody in a firm signs up, premiums reflect the average cost of coverage for a large group of people — young and old, healthy and sick. Usually, all workers in a given workplace who choose the same coverage pay the same premium.

Numbers don’t lie. And THIS is why people who don’t have access to insurance through their jobs simply cannot get basic access to medical care. It’s why the ACA is expanding Medicaid to help cover more Americans – including, specifically adults without dependents – and increasing the income limits. This allows MORE people access to what they can’t afford or can’t qualify for currently.

More access for more Americans is a good thing.