Well, good old tropical depression #9 has been named now: Isaac. And though it’s early to know with any real certainty where it’s going, current tracks put in on a direct course for Florida.

National Hurricane Center Track as of 11am August 22nd. I’m where the red arrow is pointing at. (Click for larger.)

And, even looking at the early spaghetti models, many of them are plotting a course near or through the state: 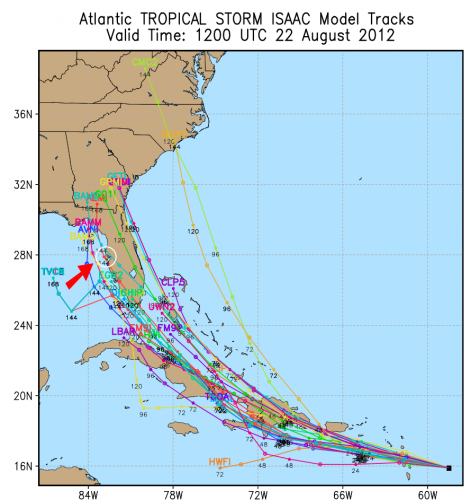 Early models as of August 22nd. I’m in the white circle where the red arrow is pointing at. Not very promising so far.

What’s amusing about all of this however, is that the Evil Old White Men Overlords National Convention Republican National Convention will be starting in Tampa on Monday. This is one instance where I wouldn’t mind some of the weather to come our way. Wouldn’t it be oh so sad if Mother Nature herself washed them out of our state?

What’s also funny about all this is a few months ago we had some SERIOUS rain and flooding in the area. A major thoroughfare in downtown Tampa, Bayshore Blvd, was closed due to flooding and the waves of the Bay being pushed up over onto the road. They talked to the Tampa Mayor about could weather impact the convention this August given that it’s timeframe is very close to the peak of hurricane season? And the mayor said something to the effect of, “well it’s only a 1% chance of that happening” and passed it off as such a remote possibility as to be rendered moot. So if a tropical storm or hurricane WERE to impact, it would be highly ironic.

Anyway, we’re really early on still. These models will likely change a dozen times between now and Monday. In a few days, we’ll have a better idea where it should be going but I thought it was too full of amusing potential irony that I had to share.