I went to Megacon for the first time this weekend. Previously, I made my Comic Con debut last year, in my first-ever cosplay as a girl Marty McFly to meet Lea Thompson at Tampa Bay Comic Con.

This year, we had even higher stakes as none other than Doc Brown himself, Christopher Lloyd was going to be there!! 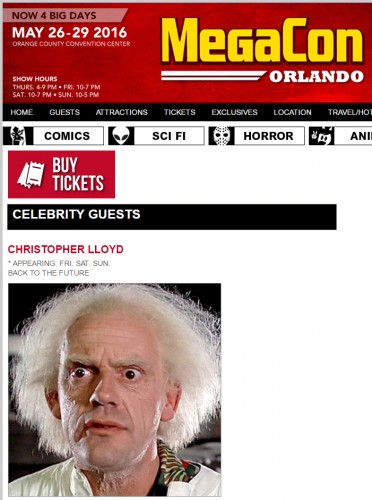 I bought us tickets for Saturday, bought a 1:30pm photo op with Christopher Lloyd and dusted off the old Marty cosplay outfit. I was psyched!!

A little after 7am early Saturday morning, the alarm went off after about 4.5 hours of sleep. I wanted to make sure we got an early start so we could get there close to the 10am opening of the convention. We got ready and headed out, leaving a little later than I had wanted at around 9am, but given it was only a 90 minute drive, I figured that would still get us there by about 10:30am and probably in the building around 11am.

We set off on I-4 from Tampa to Orlando. Made great time until….we came to a screeching halt somewhere around Auburndale. It was just an absolute mass of cars, literally crawling forward an inch at a time, stopping, then moving forward a tiny bit more. Repeat until you go insane. (We came to a near dead stop somewhere around mile marker 50 or so and had until exit 72 for our exit. All of which was just jammed.)

What should have been an hour and a half turned into over THREE HOURS of absolute maddening traffic. We didn’t even get to the convention center until noon. Where we then further got stuck in a never-ending line to the toll booth trying to park. 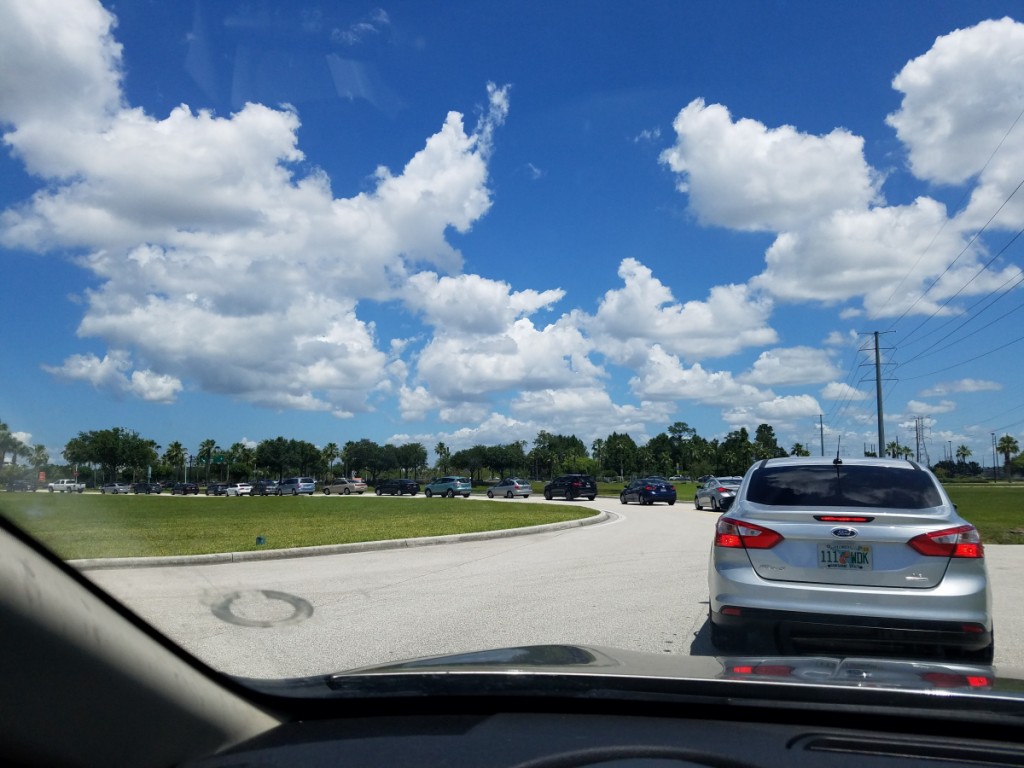 The wall of cars converging from multiple roads trying to get into the parking lot for MegaCon.

As we sat there the time just kept ticking by. I had a 1:30pm photo op that was booked and paid for! By the time it was nearly 12:30, I knew I couldn’t wait any longer. I actually threw the car in park, grabbed my stuff and left Love to park the car. 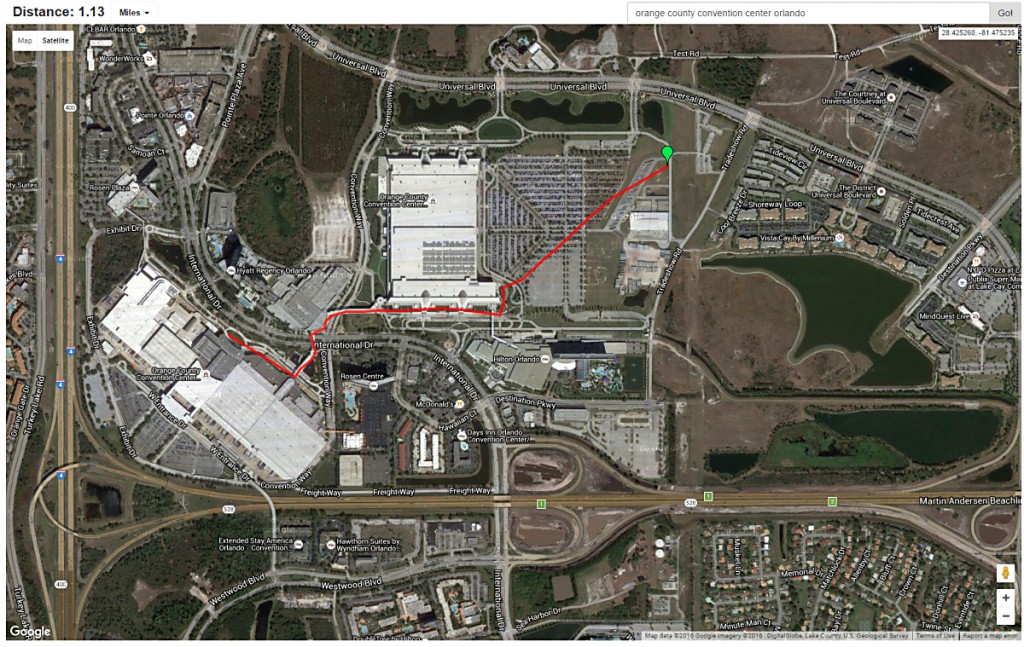 Over a mile run from where I had to leave Love with the car (who was stuck in line trying to park) just to get to the West Concourse to make my 1:30pm photo op.

I took off, running in 95F heat through acres of parking lot, past other concourses of the convention center trying just to get to the building. After literally over MILE of run/walking (I measured it on google maps later), I ran smack into a line extending the entire length of the West Concourse, OUTSIDE stretching back just to get in the door!!

About 15 more minutes of this line, I finally made it in the building. Only to be faced with ANOTHER LINE that literally WRAPPED around the entire perimeter of the massive room within the convention center! I had prepaid for my ticket but I needed my wristband and the line to get it was several thousand deep! I knew they were expecting over 100,000 people for the weekend but I never expected they would ALL be ahead of me in line!!

At this point, it was 1:15pm. That was the time I was supposed to line up for the photo op and I didn’t even have my wristband yet! I got out of line, found a person who worked there who directed me to a manager. Another guy came up at the same time who ALSO had the same 1:30pm photo op and she escorted us both all the way up front, direct to the ticket taker and got us our wristbands. Success!

Except the photo ops were on the entire other side of the convention center. And it’s a MASSIVE space that was FULL of people. The guy and I (never caught his name) stuck together, weaving in and out of people, dashing like mad fools trying to make our way to the photo section. We arrived literally right at 1:30pm. We were able to get in line and thankfully, Christopher Lloyd was running a few minutes behind.

I was DRENCHED in sweat at that point despite not even having my jacket or vest on and fighting to stop panting from the non-stop running I had done for the past hour. Remember, I bailed out of the car around 12:25pm and it was now 1:30pm and it took that long just to get from the parking lot to the line!

Again, thankfully, the photo op was running behind so I had time to cool off enough to put the rest of my costume on, touch up my makeup and reapply my lipstick. By around 2pm I got in and got my pic with Christopher Lloyd: 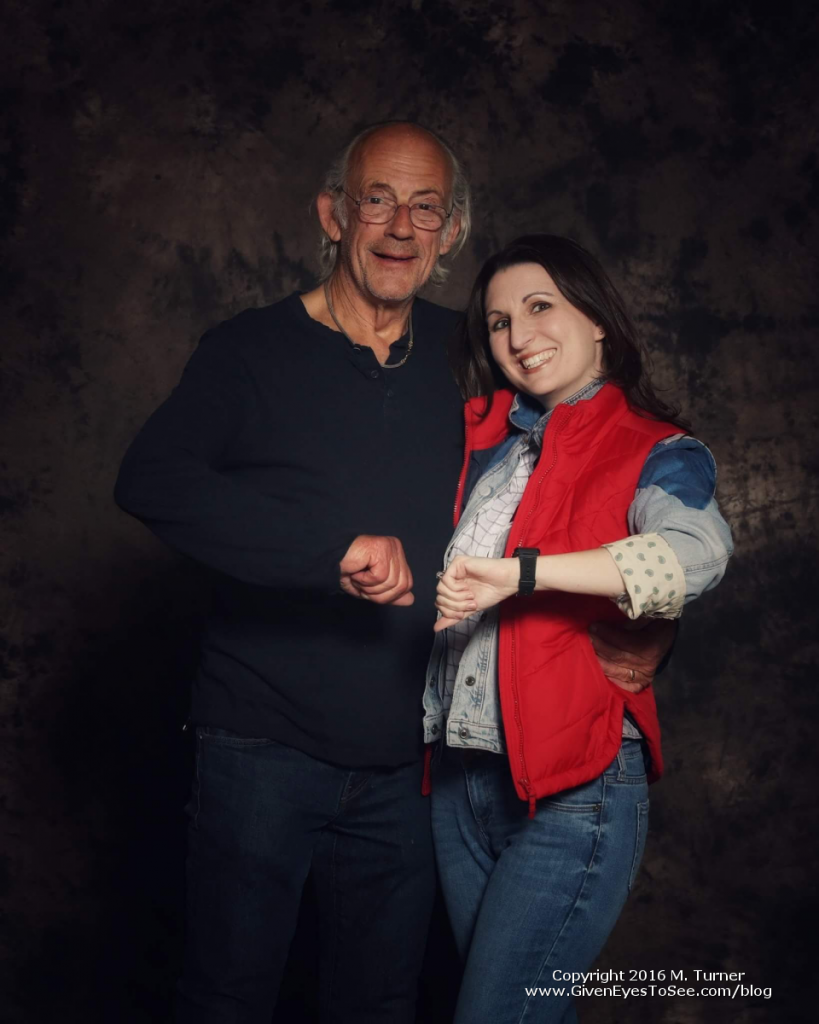 Doc Brown himself, Christopher Lloyd and me in my female Marty McFly cosplay at Megacon Orlando 2016.

Thankfully, while I was getting my photo, Love was able to get parked, get to the building and also find someone to let him cut ahead of the wristband line to meet me just as I finished up. He missed out on seeing Christopher Lloyd during the photo op, but he wasn’t planning on being in the shot anyway, so it wasn’t a huge bummer.

After the pic, Love wanted to get John Barrowman to sign a drawing of his. So we immediately went over to the autograph area since he was out and we didn’t want to miss him. 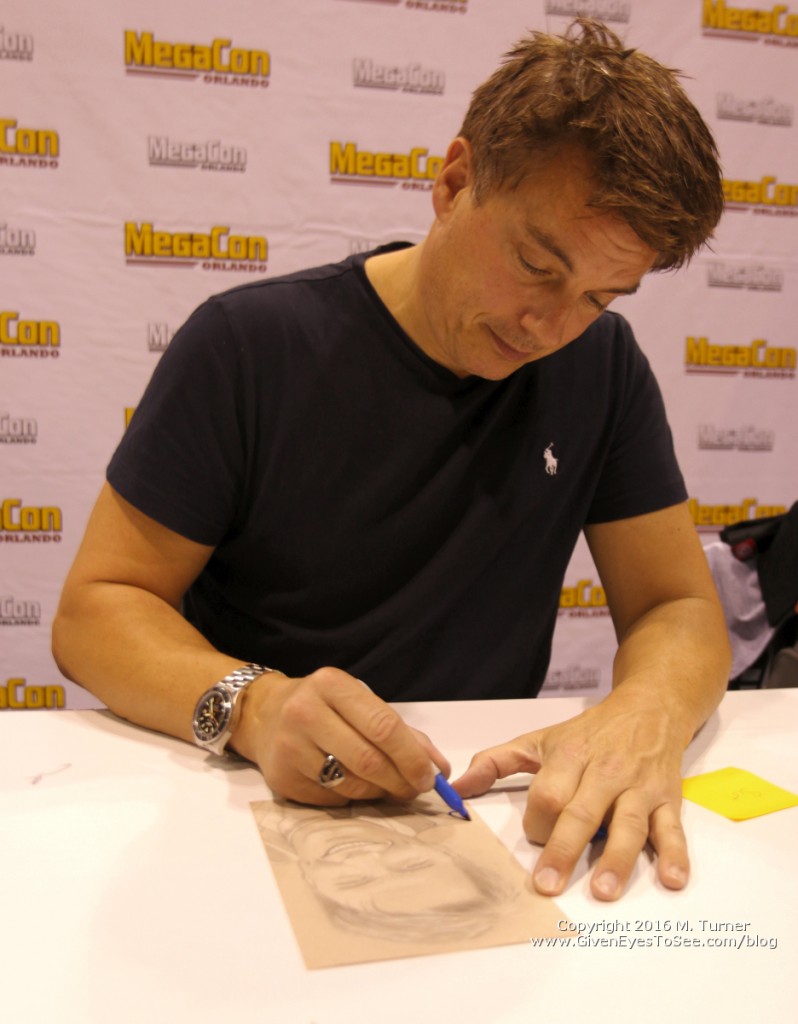 John Barrowman signed a drawing that Love did of him at Megacon Orlando 2016.

He was funny and nice. 🙂

After that, I wanted to get over to the Holler DeLorean Time Machine that was set up that you could take photos with. They are part of Team Fox traveling the country in their custom-built Time Machine, raising money for the Fox Foundation for Parkinson’s research. (They’ve raised over $300,000!!)

Of course, in keeping with the Megacon theme, there was a line. We waited about 45 minutes or so. The people in front of us were awesome though and she had the best take on a female Doc in his radiation suit cosplay! She even made a Plutonium Case purse! So awesome. 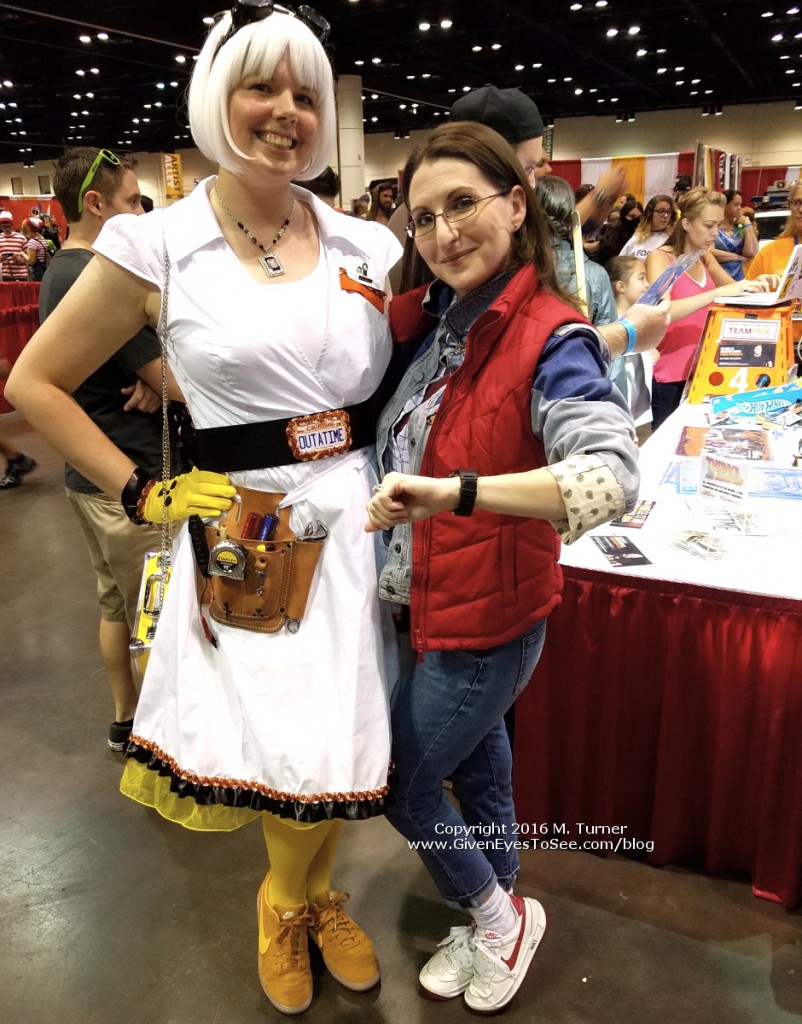 Her outfit was such a creative take on Doc in his radiation suit, making an excellent gender bend female Doc Brown and female Marty McFly cosplay duo! 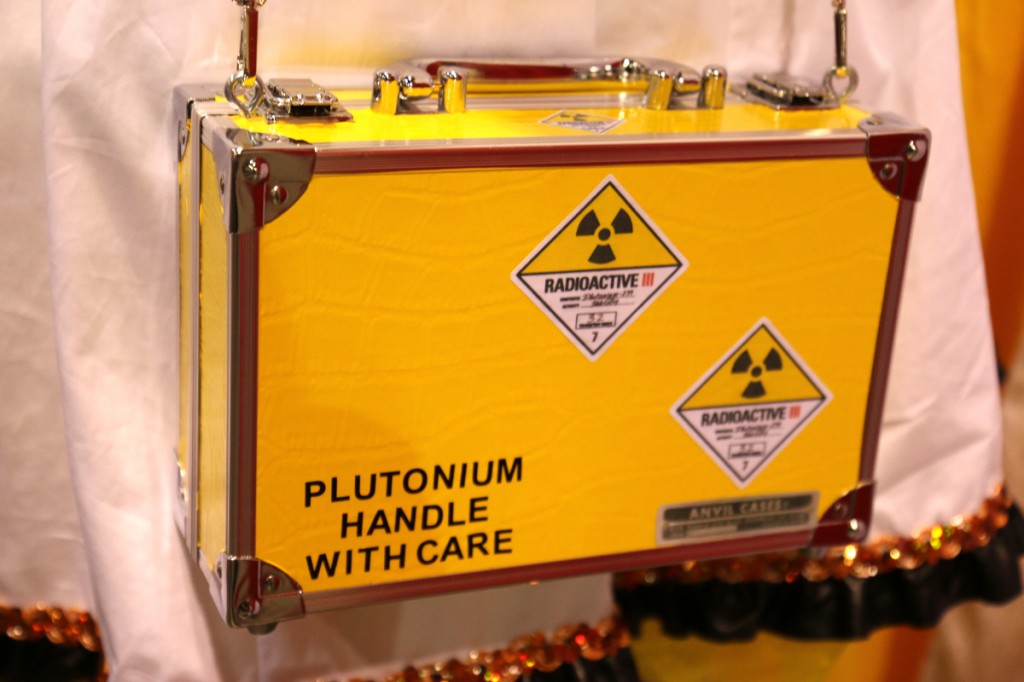 She even made a plutonium case purse. So clever!

Oliver Holler was taking pics and he was very generous with his time and so easy-going. He took a pic with his camera and multiple ones with mine, allowing me a few poses. No rush and no pressure. I told him I was a kickstarter backer on the Back in Time documentary (in which they are featured) and he thanked me and shook my hand. 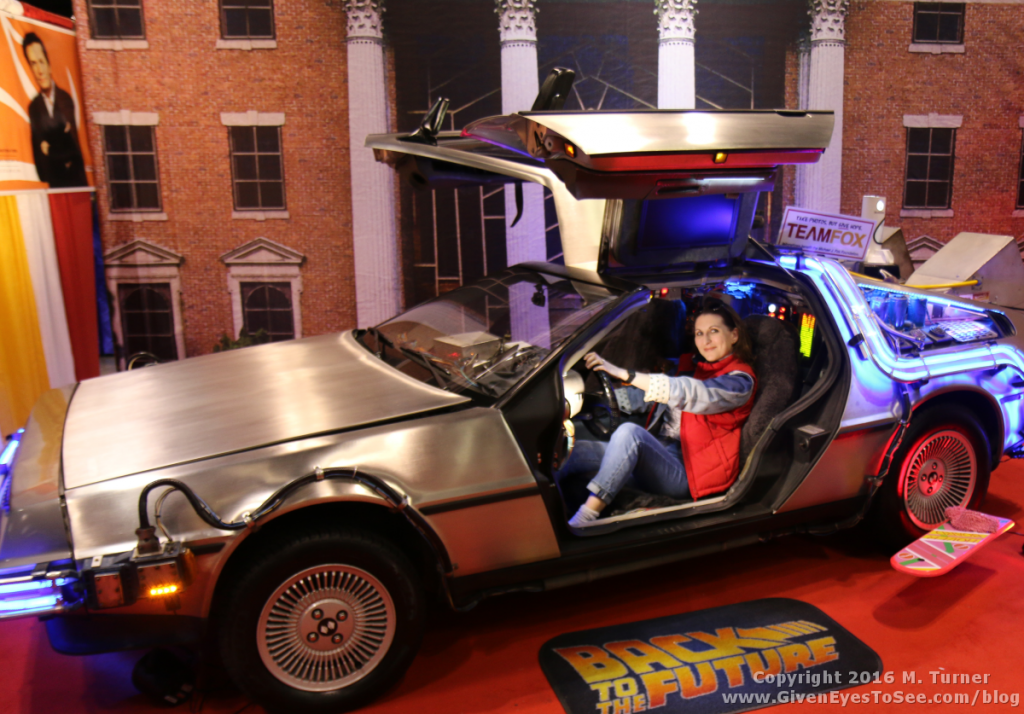 Me in my female Marty McFly cosplay in the Holler DeLorean Time Machine at Megacon 2016. 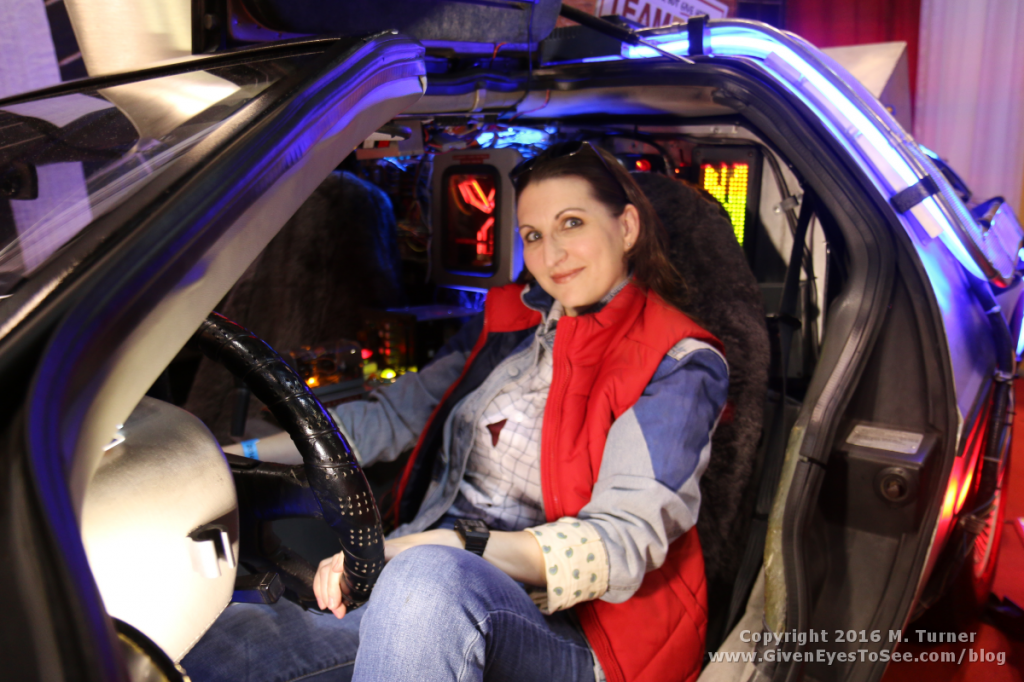 Me in my female Marty McFly cosplay in the Holler DeLorean Time Machine at Megacon 2016.

At this point, it was like 3:20 and we hadn’t eaten, so we grabbed a pizza and took 10 minutes to scarf it down. But I had a return ticket to get Christopher Lloyd’s autograph and I was supposed to be back around 4pm and we were on the other side of the hall, so we fast-walked back to the autograph area just in time to get in line.

And if you’ve noticed a theme for how our day went and you guessed “waiting in line” ding! You are correct. Because we SLOWLY moved through the line until we were 3rd in line to get our autograph. At which point, Christopher Lloyd was going to take a “10 minute break” ….which turned into nearly an hour. 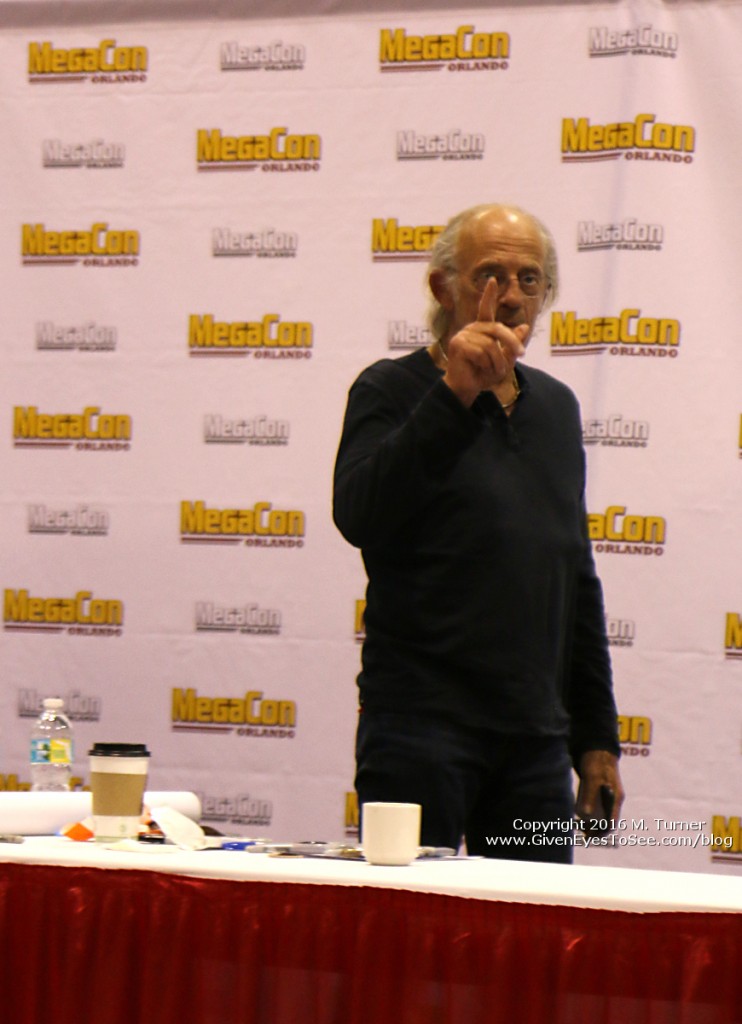 Ironically, a man famous for a movie about time travel, has himself, no comprehension of time. His, “one minute” gesture turned into a nearly hour wait.

But, eventually he DID return! And I was able to get my BttF poster signed. 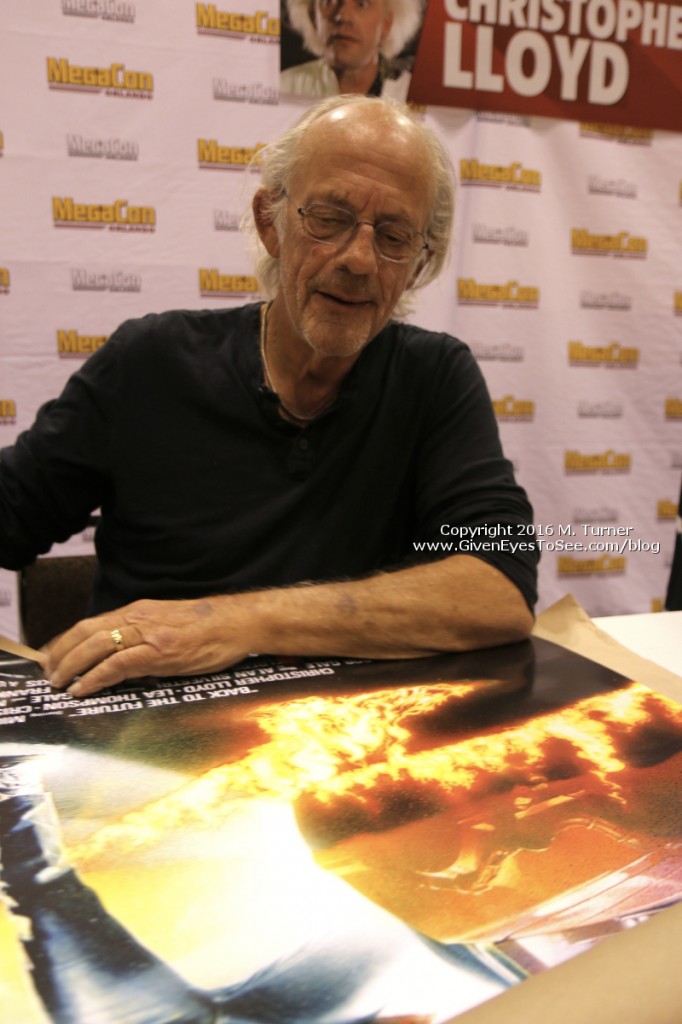 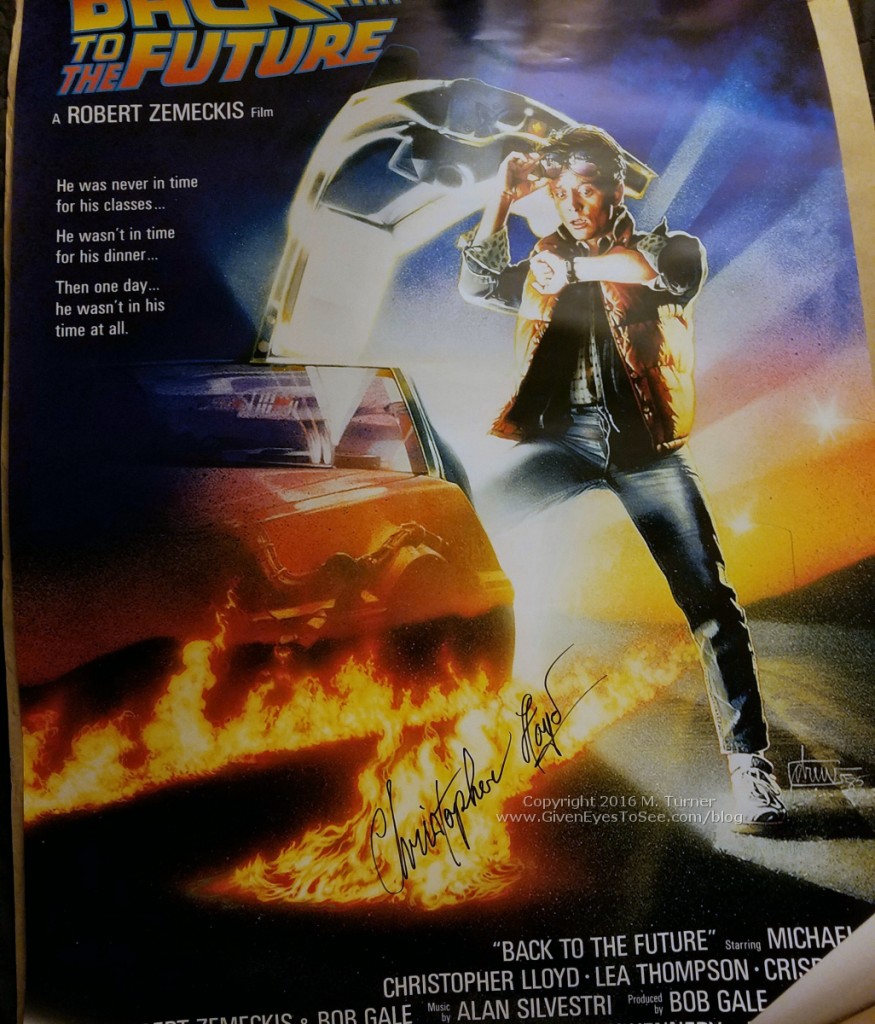 My Christopher Lloyd signed Back to the Future poster!

By this point in the day it was about 6pm. The day was almost over! We briefly spotted Jen and John (in full “Junk Lady” costume) from Epbot but didn’t really have time to hang out. They wound up winning Best of Show for the costume contest! 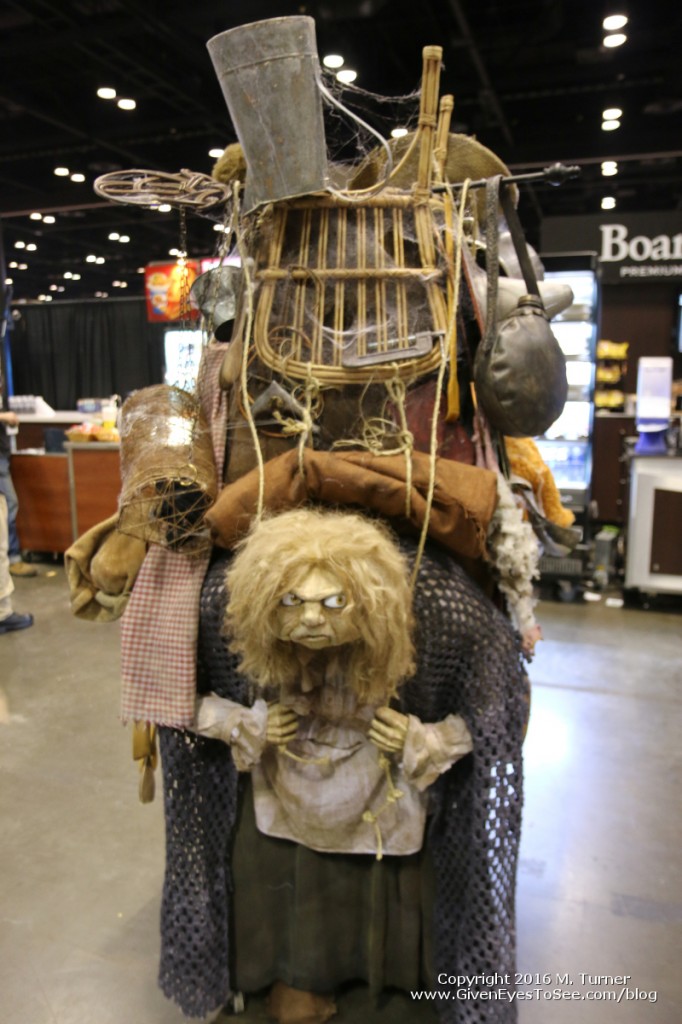 John & Jen from EPBOT made the Best in Show winning Junk Lady costume. So glad I got to see it in person!

We had about 30 minutes to run the floor and try to shop but it was a mostly futile effort at that point. We missed almost everyone and everything. So many people I knew were there – and…I missed them all. I only found Jen because it’s hard to miss the Junk Lady. LOL

We tried to get into the costume contest but the line (oh the LINES!!!) was so long, it was hundreds of people in VIP, hundreds more in Premium and then an endless line of regular. We knew we’d never make it so we decided to leave.

Problem was, remember how I left before we even parked? This means I didn’t know where the car was. Turns out, Love didn’t either. We left the West Concourse a little after 7pm. An hour and a half later, we encircled the ENTIRE BUILDING and somehow managed to not find our car. We literally walked almost 3 miles and two hours trying to figure out where we went wrong. Finally found it as the sun was setting. This was our route: 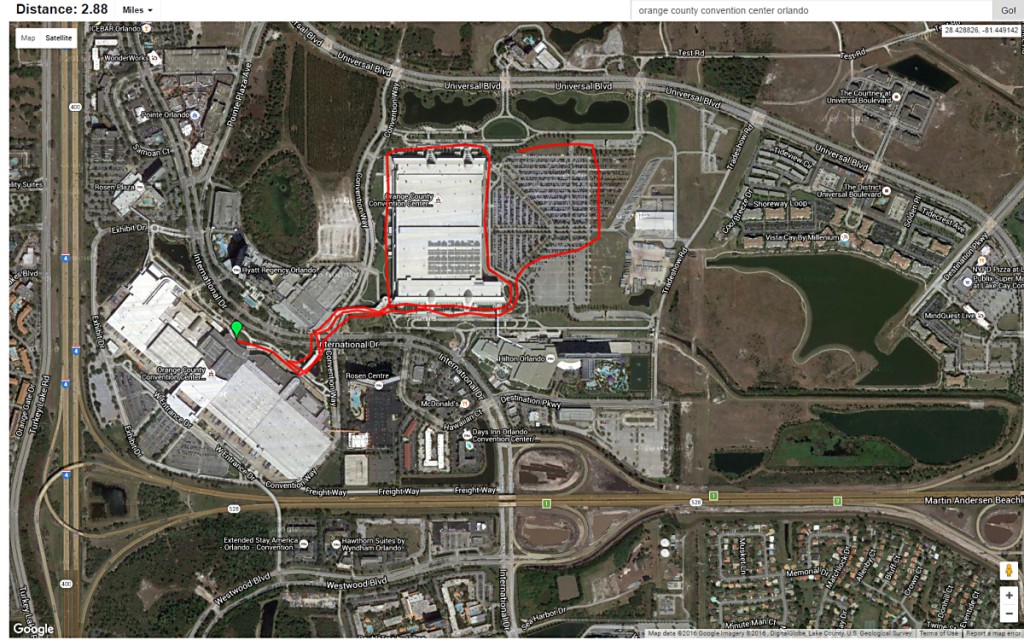 They are so not kidding when they state this is the 2nd largest convention center in the entire US. We know because we walked the whole damned perimeter!!

We didn’t make it home until about 10:30pm. So it was a LONG day full of absurd lines. And yet…we had a ton of fun. I got to meet an icon and in the end, I had a blast.

Tampa Bay Comic Con is coming in August and Megacon announced Megacon Tampa Bay for October so we will definitely make at least 2 days of each of them since they’re so much closer and easier to get to-and-from. I wish I had more time at Megacon Orlando but while I missed out on a lot, the things I DID do were awesome.

Checkout my Megacon Facebook Album for some more photos.