It’s just so much I can’t even explain it all. But the long, horrible story short is that the Element’s air conditioning is completely wrong. I’d say, “again” but it seems like it was never fixed right the first THREE times we’ve done it. This has been going on for TWO YEARS now and still, it’s not right.

The extremely summed up version is that July 2010 we took it to Ice Cold Air and replaced many parts to the tune of about a thousand dollars. But that didn’t fix it, so MORE parts were replaced to the tune of another six or so dollars. Still didn’t work. Took it to a Honda dealership, was told that the “repairs” that were done were done incorrectly and the system was totally in shambles. There was shrapnel from the compressor everywhere and the whole thing – every part previously replaced AND more – needed to be redone. We fought and got some money back from them (few hundred, not enough) and took it to a Tires Plus to be fixed, what we thought was going to be correctly to the tune of about $2,200. I’m still paying it off. (Fun entries here then here and here and then again here just for a handful!)

Tires Plus though screwed us just as much as Ice Cold Air (I would note, I didn’t chose either location; they were chosen by my step-dad who thought they were honest but clearly turned out not to be) and in fact, my step-dad found out that Tires Plus overcharged us several hundred dollars more than the dealership would have charged. He did get back a few hundred from them as well. 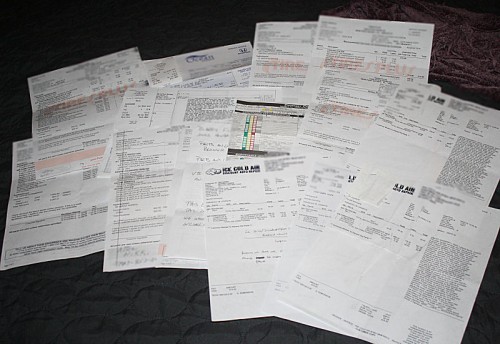 Every one of these is an invoice for a/c work done to the tune of thousands of dollars.

So, that was the past two summers. And now, the a/c has been not working right again. First, it made a sorta hissing noise sometimes and then it started not blowing cold when we’d be idling at a stoplight, then just not cold at all. I took it up to the Tires Plus today with my mom and step-dad only because we wanted to see if it was a warranty repair, not because we wanted to go to them. They said we needed a radiator fan and a compressor fan to the tune of almost $600.

We declined and took it over to the Honda dealership to get another opinion. Things got worse from there. Remember thew whole shrapnel thing? Yeah, turns out, they never actually fixed it. The whole system is clogged with metal shavings from the compressor. It’s preventing the compressor fan from turning on (hence the no cold air) but worse, it’s also preventing the radiator fan from turning on. You know, the thing that keeps the engine from overheating? Yeah, that.

Dealership quoted $900 to replace the two fans. And about $4,000 to replace the entire a/c system. Because the shrapnel basically goes off like a bomb and gets in every hose, every nook and every cranky and just basically fucks the entire car. The dealer said he’s never seen this happen on an Element before. He said the only time he’d ever seen anything like it was back on some early 2000’s CRV’s which had a factory recall for a problem that lead to a similar situation. And that was such a fluke, it basically destroyed a run of cars.

The car’s blue book value is about $4,000-4,5000. This is where my day basically turned to shit. And when I broke down sobbing at the dealership. You recall, I’m still paying off the last repair for this very thing – supposed entire a/c replacement due to shrapnel and all. This means that every penny of the thousands and thousands of dollars that has been spent so far on this repair has literally been thrown away. Flushed down the proverbial fucking toilet.

It’s like the worst fucking déjà vu of all time.

The dealership said we can’t even really drive the car without replacing the fans, even with the a/c off since it could overheat, especially sitting or in stop-and-go traffic. But they wanted $900 just to drive it, not including fixing the air.

Mom and I looked at the option of even trading in ours and getting a different Element instead. Seriously. It was that kind of day. But for a 2005 (ours is a 2003), they wanted $12k. With trade-in of ours, they still wanted $8,250. Are you kidding me?? Obviously that’s not only insane but stupid (because even if I could afford a car payment – which duh, I totally can’t – I wouldn’t buy a SEVEN YEAR old car on a car payment!)

I was not ready to just junk the car. She’s an awesome car. And she has 4 new tires, new window, new brakes, new seat covers, new battery – besides the a/c which has simply never been properly fixed (no fault of the car’s), the car is perfect. She looks great, she drives great and the engine is in great shape. It just seemed so stupid to take scrap-metal trade-in value on the car and then wind up buying a beater, you know? But I couldn’t possibly put $4k into the car.

So. I thought about it. Then I called the place we took it to the last time when we didn’t know what was wrong and turned out it was just that we were low on oil. Guy’s name is Wayne. He was really awesome. And Love and I both trust him. He can get the fans fixed for less than $500. And he wants to look at it and see what’s going on. Even if it needs and entirely new system, he’s thinking it’ll be less than $2k. Which is still a metric fuckton of money, BUT, half what the dealership wanted. And, it’s not like I could get a car as nice as the Element for $2k.

If my choices are get a piece of shit for $2k and wind up with who knows how many more problems from it, or invest it back in the car to get it fixed CORRECTLY this time, I think that’s the better option. And, we can always just get the fans replaced, which makes it safely drivable and figure out what to do with the a/c after that.

And that’s what I’m going to do. Tomorrow, Mom will meet me down at Wayne’s. We’ll drop it off and at the very least, fix the fans so the car can be driven safely. And we’ll evaluate from there. The money to repair this goes on the same credit card I’m still paying off from the last repairs. It’s my Mom’s and she’s letting me add this repair to is since there’s literally no other way to make this happen. (I had gotten the balance down to $2,200 by paying every month come Hell or highwater, but now…it’s just going to be more years added onto it. Enslaved for life for a measly few thousand bucks.)

I feel a little better that at least we’re not facing scrapping the car. It’s too good of a car and it’s worth more than that. Once we properly fix this problem, the car will be fine. It’s just this same, damned issue that isn’t getting fixed that keeps coming up over and over and over. Today was such a mess. It was just a nightmare and I’m just so beat up by this whole day. I’m pretty much completely emotionally striped raw at this point.